Nuno Bettencourt’s signature Randall amplifier will be officially unveiled at Winter NAMM in January 2009, but Nuno fans won’t have to wait until then to snag a unique piece of signature gear.
As posted at the Extreme band forums, Funky Munky Music is awaiting delivery of a very limited run Washburn N3, based on Nuno’s third ever Washburn prototype, which had a maple fretboard and two Bill Lawrence L500 pickups. The standard Nuno model, the N4, has a Seymour Duncan 59 in the neck in addition to a bridge L500.
There was a Korean-produced model called the N3 for a while, but the new limited edition N3s are made in the USA. They have 22 frets, unlike Nuno’s original which had 24, and feature an original Floyd Rose bridge, a birdseye maple neck and fretboard, the original 1 5/8” nut width, and the original N4 neck profile. Interestingly, at the Extreme forum, Funky Munky says Nuno asked Washburn to revert the neck profile of the N4 to the original shape within the last month or so, and change the nut width to 1 5/8” instead of the current 1 11/16” nut width. 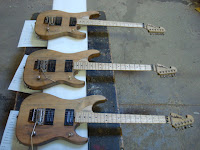 The new N3 will be available in relic and non-relic versions, and the holographic N3 sticker will be included as case candy, so buyers have a choice over whether they put the sticker on or not.
As for that Randall amp, in an official press release Nuno says “There is a reason that I have never endorsed any amplifier company exclusively. Because I have always had to jump back and forth from amp to amp. One for rhythm, Another for solos. A different amp on every recording and tour, constantly searching, unsatisfied. Always good, but not great. Never finding that perfect tone. There was always something missing. Basically, I gave in and truly believed that Marshall would be the staple to fall back on… The Constant.” 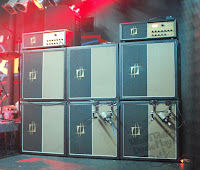