One of my favourite tricks is to combine hammer-ons, sweep-picking and tapping. This little lick is pretty straightforward, and it provides an interesting alternative to a straight up-and-down arpeggio. 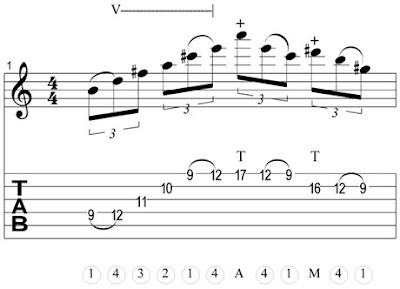 This lick can be tapped with one finger but I prefer to use two. I usually tap with the middle finger so I can hold the pick in the normal manner. When playing this lick, I pick over the fretboard, between the 19th and 20th frets, which positions the tapping fingers nice and close to the notes they’ll be hitting (at the 17th fret of the high E string and the 16th fret of the B string).

I’ve included the left and right hand fingerings. If you’re new to this type of right-hand finger notation, ‘A’ is the ring finger, and ‘M’ is the middle finger. They’re named after the Latin terms, with the exception of the Italian-named pinky, and it goes P (pulgar, or thumb), I (indice, or index), M (medius, or middle), A (annular, or ring), C (chico, or pinky).

Here’s the slow version, at 100bpm in 8th note triplets.

Here’s the ultra fast version, which is the same pattern, but played at 140bpm in 16th note septuplets. The trick to playing it this fast is to both pick and fret with a light touch.