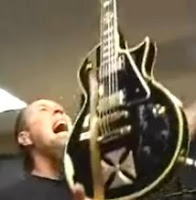 James Hetfield has started using the ESP Iron Cross model I posted about here. A few shots have surfaced on the ESP web forum:As suspected, it’s based on ESP’s Eclipse model, rather than a straight Les Paul copy – it has the sharper Eclipse cutaway and ESP’s flag inlays.

The guitar is based on Hetfield’s customised 1973 ‘Iron Cross’ Gibson Les Paul, and the word is that it will be officially unveiled at Winter NAMM 2009 in ESP and LTD versions.

Cheers to forum member Metallijosh for the screen grab.

Just saw this one on Guitarsite.com. MXR is releasing a custom shop reissue of the Dyna Comp, the best freaking compressor pedal in the universe. Unlike the (still quite excellent) current production version, the 76 Vintage model uses the original spec integrated circuits (ICs), and does away with the LED added on later versions.

These appear to be similar in spirit to the MXR CSP-026 Handwired 1974 Vintage Phase 90 pedal, which is also made to original specs in the custom shop (click the link to buy the Phase 90).
Here’s the press release:

The MXR Dyna Comp that was produced in 1976 has long been regarded as the ultimate stomp box compressor. There’s something inherently musical in the way it “tightens up” a guitar signal, raising the volume of quiet notes and leveling off peaks to create rich, full bodied sustain.
And now the MXR Custom Shop brings back that highly sought-after sound with the ’76 Vintage Dyna Comp. Meticulously researched and superbly crafted, it features the exact same circuitry used in the original 1976 Dyna Comp, identical in its component layout, silkscreen and handmade wire harness.
The key component is the old school CA3080 “metal can” integrated circuit (IC), which yields quieter operation, greater transparency and increased dynamic range. These ICs have been out of production since the ’80s, but MXR has tracked down a stash of them—enough to produce a limited run of these little red boxes of compression bliss.
With supplies limited, the MXR ’76 Vintage Dyna Comp is destined to quickly become as ultra collectible as its noble ancestor.
The MXR ’76 Vintage Dyna Comp pedal has a street price of $175.00.

Sweet. I have a modern Dyna Comp reissue on my pedalboard and I hope I get to test drive one of these new ones so I can compare the two.