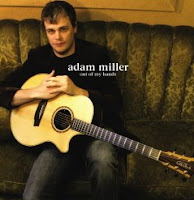 Adam Miller is an Australian acoustic guitarist who has performed with Les Paul, Tommy Emmanuel and Charlie Hunter, and holy crap, this CD is some funky stuff. Opening track ‘Day Gig’ leaps straight out of the speakers and goes for the throat with complex yet always in-the-pocket acoustic mastery. It sounds cruisy and laid back, yet demonstrates an unexpectedly high level of technique.

Track 2, ‘Traffic,’ would work equally well as an electric rock song, but as an acoustic track it comes across as bluesy, soulful and groovy. There’s an earthy honestness about the playing, whether Miller is blasting out a speedy hammer-on lick or locking in with the band for an unstoppable funk grove. It’s that kind of alternating rhythm/lead playing that Stevie Ray Vaughan was so great at.

The mood cools down a little on the third track, ‘Straight Forward,’ with a cool ascending bassline and bluesy rhythm fills before taking off on a harmonized melody which reminds me of Jeff Beck’s Blow By Blow, recontextualized as an acoustic album.

Track 4 shows the first signs of slowing down, with the tender ‘Finding Home.’ Again Miller gets great mileage out of combining melody and chordal accompaniment. The mood stays quiet for the ethereal ‘Rushing In,’ before things get funky yet spacious on ‘Dinosaurs.’ ‘Out Of My Hands’ hits hyperspeed with fast hammer-on/pull-of licks and a level of energy not often heard in acoustic music. ‘Holding Hearts’ returns to the cool bass and brushed drums of ‘Finding Home,’ and ‘Frankie’ is a quiet guitar/piano duet which reminds me of ‘Follow One Hope’ from Eric Johnson’s ‘Venus Isle’ album.

The CD wraps up with ‘All I Need,’ which suddenly breaks into a tasty, Tommy Emmanuel-like electric guitar solo, with a warm buttery tone and upbeat melodies. It’s a very unpredictable ending to the album, but it works very well.

Miller plays his Cole Clark Angel acoustic guitar on all tracks, and the guitar is always presented clearly and cleanly in the mix. You can hear every little string noise, every finger scrape, like the band is playing right in your living room.