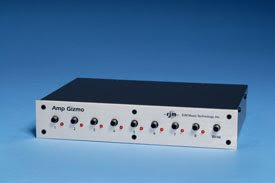 Guitarist Steve Turner is an RJM endorser, and he talked about his RJM switching system when I interviewed him a few months ago. You can see the full interview here and visit Steve’s site here, but here’s what he had to say about his rig:

At the moment I am using their base model Amp Gizmo. You could think of it as an interface between your midi floor board and your non midi guitar amplifier. RJM make a bunch of different cables to connect the Amp Gizmo to the pedal input of your amp so it can be used with all sorts of guitar amplifiers.

You basically tell the Amp Gizmo what each midi patch will do to your amplifier. When you select a particular patch it triggers your amp mode, solo boost, effects loop or whatever else your amp can do via standard pedal input.

For guys out there struggling with multiple foot controllers this should really be ringing some alarm bells… It also has a ‘midi through’ to connect to whatever other midi gear you are running. From one midi floor board I can control my effects processor as well as the switchable settings on my Mesa Boogie. I don’t need to run the separate Mesa Boogie amp controller floor board anymore as the Amp Gizmo replaces everything it does. I control my amp features via midi. Amp and effects changes that used to take me three or four foot taps now take only one. When I am singing I don’t have the luxury of being able to look at my feet and perform an elaborate tap dance. Actually, dancing is not something I can do at the best of times! I would rather grab a beer and watch the ladies go for it.

I struck up a friendship with Ron from RJM and when I expressed an interest in upgrading to the RG-16 and Mastermind floor board he offered me an artist endorsement. The RG-16 does everything the Amp Gizmo does but also has 8 effects loops through which I will be able to run my analog pedals.

Once I integrate the RG-16 to my live rack I will be able to use my analog pedals and have everything – the amplifier, the effects processor and my individual pedals –controlled via the Mastermind midi controller and RG-16. Allan Holdsworth and Dweezil Zappa use RJM so that has to say something about the quality and design!