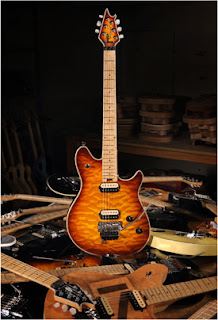 In the February issue of Guitar World (which comes out on December 16, go figure), Eddie Van Halen talks about his new Wolfgang guitar, due out early in 2009 under his own EVH brand, which is built and distributed by Fender.

Back when Eddie first signed with Peavey, he told Guitar World that he owned the Wolfgang design, and if he ever left Peavey – which he said he couldn’t see happening, but then again who could have imagined VH would turf Mike Anthony and rehire David Lee Roth? – the design would leave with him.

In a new, exclusive interview with Eddie Van Halen, Guitar World magazine talks to the Van Halen legend about the making of his new EVH Wolfgang guitar from Fender (due in stores in early 2009). In the interview, appearing in the February issue of the magazine, the guitarist explains how the Wolfgang is “a culmination of my 35 years of experimenting with guitars. Everything that I’ve destroyed, stumbled onto, learned and experienced in my journey to get to where we are now is in this guitar. And there is a lot more to come.

“A guitar is a very personal extension of the person playing it. You have to be emotionally and spiritually connected to your instrument. I’m very brutal on my instruments, but not all the time. I’m not to the point where I’m like Pete Townshend and smashing the shit out of it after a gig. I wouldn’t do that to an instrument that is a part of me. I don’t need to do this for financial reasons. I could have just stayed at home and built this guitar for myself. I do this because a lot of people ask if they can get what I use. Well, yes you can and what you get is identical to what I use.”

Throughout the in-person interview with Guitar World writer Chris Gill, which took place in a workshop at the EVH/FMIC (Fender Musical Instrument Corporation) factory, Van Halen details the painstaking process of designing and constructing the EVH Wolfgang.

“The tolerance of things on this guitar is like NASA standards. It had to be tight, and it had to be quality. Le Mans is probably the most important race on the planet. It’s 24 hours—a grueling, brutal race. There’s a reason why an Audi R8 won that race three years in a row [2000–2002]. Those guys did what we did with this guitar. They paid attention to every damn detail. You can’t say, ‘Oh, that will do.’ No, it won’t do.”

Regarding the slim profile of the Wolfgang neck, Van Halen commented, “It was a matter of closing my eyes and feeling it. We went back to some of my earlier guitars, like the striped guitar I had back in 1984. That’s the way I like it to feel. It’s nice. It’s like a sexy woman.”

When asked if we could expect any new music from him soon, the guitarist had this to say:

“I’ll be making music ’til the day I die. I’ve done all kinds of stuff, and more is coming. I can’t tell you exactly when right now. Wolfgang is in the 12th grade and he needs to graduate first. Then I’m getting married in June. We’ll pick it up after that.”

Eddie’s gear company has its own website but it’s not updated very often: www.evhgear.com