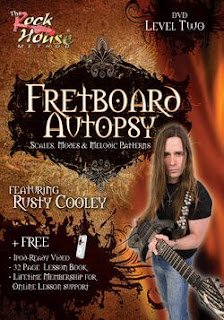 Rusty Cooley has just released a pair of instructional DVDs through Rock House. I’ll put them on my ‘to do’ list of stuff to buy and review, but in the meantime, here’s the press release:

Rock House announced the release of two instructional DVDs featuring Rusty Cooley, one of the most popular and technically proficient guitar players of this generation. The new products titled Fretboard Autopsy Level 1 & level 2 has Rusty teaching his unique approach to fretboard visualization through shapes, patterns and years of model knowledge. In Level 1 Rusty shows students how the modes are covered across the neck, 5 and 6 string root modal patterns, extended and split patterns, single and double string techniques and more, In Level 2 Rusty unlocks the road map that gives guitar players the freedom to improvise over the entire fretboard without being locked into positions. Learn 4, 5 & 6 string root modes, extended patterns spanning the neck, 3 octave modes, reverse linear patterns and modal sequences. Rusty shows you how to create modal chord progressions for each of the 7 modes and more.

Rusty was named one of the Top 20 Most Blazin’ Shredders of all time by Total Guitar Magazine and his Shred Guitar Manifesto has been sited as having influenced John Petrucci and Mark Tremonti. “Rusty Cooley is certainly at the fore front of pushing the boundaries of modern guitar playing.” Said Joe Palombo, Executive Director of Rock House.

Each DVD comes with iPod ready video, a booklet with each lesson tabbed out and membership to Rock House’s lesson support site at www.RockHouseMethod.com. This feature, exclusive to Rock House and its partners, offers students supplementary support for the lessons featured on the DVDs. Once registered, students can interact with the community, utilize the additional learning tools and access the special features such as: