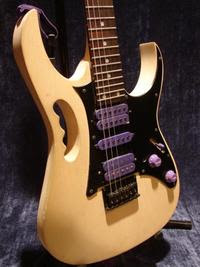 In a news posting on his website, Steve Vai has revealed that there will be a new Ibanez Jem in 2009, and it’ll be a little different from previous offerings (and no, this picture isn’t it, but I’ll explain that in a second).
The post mainly focuses on a DVD shot during his String Theories tour of last year. In the posting, Vai says of the DVD,
“I don’t know when it’s going to come out, but I’m hoping April or May. A few other things in the works are a new Legacy II amp. Just did the photo shoot today. I don’t want to blow any of the surprises so I’ll make sure when it’s announced you’ll know about it. And yup, a new Jem. This is different than all the other Jems in that it’s a h— t—. Now you don’t want me to give it up, do you? Both of these exquisite little dynamos will be announced and shown at NAMM. I will be there on the 16th and 17th at the Carvin and Ibanez booths. Not sure which one on which day though.”
What does Vai mean by ‘h— t—“? I guess the most obvious answer is ‘hard tail.’ Could he finally be foresaking his beloved whammy bar? Never. But he’s been known to use hard tail guitars in the past. The photo at the top of this post is not the new Jem, but it’s a prototype from back when Steve was testing various woods and pickups for what eventually became the Jem7VWH. This protype is on eBay at the time of writing, and it surfaced for sale a couple of years ago too. (If you notice anybody using this photo on a messageboard or something, and claiming it’s the new Jem, feel free to correct them and link to my blog, hehe).
Check out the rest of the post here, because Vai also talks about his next album, his recent master classes, and the possibility of doing a master class tour of the US.