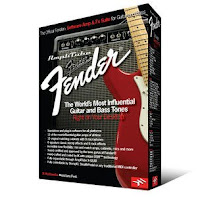 I’ve been using IK Multimedia‘s Amplitube 2 for a while now, and I find it an especially handy songwriting tool which allows me to test parts out with a variety of different amp and pedal combinations before settling on how the hell to do it live on stage. Fender was already bitten by the modelling bug a couple of years ago when they paired up with Boss to release a few pedals which emulated Fender amp tones. Now the modelling bug has well and truly sunk his fangs into Fender’s tweed-covered hide in the form of Amplitube Fender.

AmpliTube® Fender® is the only official Fender® guitar/bass amp and FX software suite, made by IK Multimedia in cooperation with music icon Fender® Musical Instruments Corporation. With a collection of 45 pieces of gear, including some the most sought-after classic and modern Fender® amps (Twin Reverb®, ’59 Bassman® LTD, Super-Sonic™, Metalhead™ and many others), cabinets, stompboxes and rack effects, AmpliTube Fender® sets the new standard for software amplifiers. From guitar to bass, and from country to blues, rock, punk and metal—whatever style you play—AmpliTube Fender® is the only amp suite that gives you the world’s most influential guitar and bass tones right on your desktop.

AmpliTube Fender® is the result of years of intense research and development by the tone gurus at Fender® and is handcrafted by the software and audio engineers at IK Multimedia. Seldom has there been such close cooperation between two leaders in their respective fields, with the goal of producing the most advanced and realistic-sounding software recreation of the world’s most renowned amplifiers and effects. The results have been amazing, as Fender’s Shane Nicholas, senior marketing manager for guitar amps said:

“An electric guitar is nothing without amp tone, and Fender® amplifiers are the standard by which great amp tones are measured. We’re confident that the thrill of plugging into a great tube amp will never die, but we are proud to give digital recording enthusiasts the opportunity to discover and utilize many of the best Fender® tones, old and new, with the convenience of PC recording. Unlike other guitar modeling software, IK Multimedia developed the realistic sounds of the AmpliTube Fender® edition with the master tone-team at Fender® Musical Instruments. From the legendary Tweed Deluxe™ to the modern high-gain Super-Sonic™, this is the real-deal palette of tones you need to make great music in the digital domain.”

The extremely accurate Fender® tones achieved by this collaboration, together with the large variety of gear included, covers the widest range of tonal palettes and makes AmpliTube Fender® the ideal choice for those who are recording guitar for the first time or for DAW users who demand nothing less than tonal perfection.

Features
Stand-alone and plug-in software for all the most popular platforms, including VST/AU/RTAS plug-in formats.
12 of the most influential guitar amps of all time.
12 original matching cabinets and more, with nine microphones.
Six signature classic stomp effects and six rack effects.
Incredible tone flexibility; mix and match amps, cabinets, mics and more.
Sound-certified and approved by Fender®.
Five separate modules: tuner, configurable stomp pedal board, amp head, cabinet plus mic, and rack effects.
Two fully configurable rigs with up to 32 simultaneous effects.
Digital tuner.
Includes SpeedTrainer™ and Riffworks™ T4 recording software.
Can be expanded with additional “Powered by AmpliTube” models using AmpliTube X-GEAR.
Can be controlled live with StompIO, StealthPedal™ and any traditional MIDI controller.
Hundreds of presets included, with more that can be downloaded from the AmpliTube preset XChange area. Powered by AmpliTube® with exclusive DSM™ (dynamic saturation modeling) and new VRM™ (volumetric response modeling) technology.
Pricing and Availability
AmpliTube Fender® will be available in 2 versions: