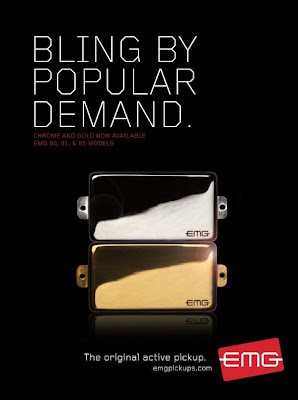 This year at NAMM EMG introduced gold and silver covers for their pickups. Previously the only time I’ve seen EMG pickups in anything other than black was on Kirk Hammett’s Les Paul. Other new goodies include a new line of pickups called the X Series, and an Alexi Laiho set which includes his favoured passive humbucker and a gain boost.

Team EMG is back from the 2009 NAMM Show and without a doubt we had a blast. The reaction to our new products was a resounding success. If you haven’t heard we are now offering high quality Chrome and Gold cover caps for our 81, 85 and 60 models which generated considerable excitement.

In addition to this new option, we also have a new line of pickups called the X series which has been highly anticipated and that we are betting will blow players minds with its increased headroom paired with the traditional EMG tone that has become iconic to musicians the world over.
The final new release is Alexi Laiho’s shredding new signature set, the ALX w/ABQ gain boost, which is composed of a signature passive HZ humbucker paired with a 3-band EQ/gain boost mounted on a push pull pot. This new set is incredibly versatile and was developed in conjunction with Alexi himself. You want his tone? This will get you that much closer!
Besides featuring EMG’s new and existing product lineup, we had some very exciting artist appearances, scheduled and unscheduled, that were just icing on the cake and made our booth THE place to be. Some of the artists hanging out included Kerry King, Alexi Laiho, Steve Lukather, Sergio Vallin, Marcus Henderson and many many others.