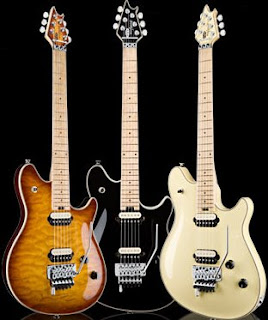 Musician’s Friend has opened up preordering for the new EVH Wolfgang guitars.

The guitars are made by Fender but released under the EVH brand name, as with Eddie’s new 5150 III amps.

The blurb on the Musician’s Friend site states:

Not merely artist-approved, the EVH Wolfgang is the result of Eddie’s total involvement and commitment. The Wolfgang is the outcome of two years of exhaustive research, testing and refining, revising, and tweaking by Eddie and his EVH crew. Wolfgang prototypes were given a grueling on-tour workout every night for over a year. As an example of EVH’s relentless pursuit of perfection, more than 80 pickups were tried and rejected before the company developed in-house the pickups that produced the “hitting me in the gut” sound that Eddie demanded.

Reflecting on the work that went into the new Wolfgang, Eddie observed, “Every aspect and component of this guitar has been examined and upgraded to the highest standards possible. We redid everything on this guitar. The only similarity to the previous Wolfgang is the body shape, and even that’s changed. You name it—stainless steel frets, double-potted custom-wound pickups, five-piece binding on the matching body and headstock, custom-made signature tuning machines and Floyd Rose bridge, new low-friction pots, and the list keeps going… we left no stone unturned.”

In addition to black and vintage white, the EVH Wolfgang comes in an opaque tobacco sunburst finish over a gorgeous quilted maple top. The EVH Wolfgang starts at $2,999.99.

Eddie has climbed the guitar summit and now shares his achievement with you. He’s done all the refining, road testing, and tweaking for you. Now it’s up to you.