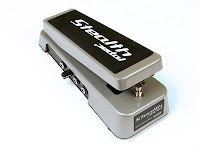 Here’s a neat little idea from IK Multimedia. They’ve combined an audio interface with an expression pedal for control of wah, volume and pitch effects, or any other MIDI-controllable parameter. I use IK’s Amplitube program quite a lot and I’ve often wished I had the ability to control various effects with an expression pedal – like making a phaser speed up, or blending between two amp models.

IK Multimedia presents the StealthPedal, the first guitar audio interface/software controller in a compact wah-style pedal, allowing users to record, play and control the included “Powered By AmpliTube” software, or any other MIDI controllable software, with the same feel and ease of use as a traditional guitar pedal.

StealthPedal is an affordable USB-powered audio interface that also works as a software floor controller, allowing anyone to record guitar or bass with Mac/PC at the highest possible quality, with 24-bit A/D and D/A conversion and 44.1/48 kHz operation. Two separate inputs are provided for Hi-Z or line level instruments as well as two separate outputs, plus a convenient headphone output.

The built-in expression pedal and switch can be associated with any parameter of “Powered By AmpliTube” software, or any other amp and FX modeling software with MIDI control capabilities. The StealthPedal controls can also be expanded with an additional expression pedal and two extra switches for building a mini-pedalboard rig with preset and single effects control capabilities for full live/recording usage.
Users are not limited to controlling amp-simulator software with StealthPedal, as it can control any effects plug-in, virtual instrument or DAW with MIDI control capabilities.

StealthPedal sports a rugged, classic-wah style, compact enclosure with a volume
knob and three LED indicators that operate as a status display, tuner or level indicator when used with any “Powered by AmpliTube” software. StealthPedal’s circuit design has been derived from IK’s StompIO high-end stage controller, ensuring the highest fidelity in the recording of for your guitar and bass with software configurable input gain level, 109dBA low noise input stage and optimal audio quality throughout.

StealthPedal also comes with a must-have assortment of software including AmpliTube 2 Live guitar and bass amp and fx modeling software, standalone and plug-in, AmpliTube X-GEAR for further expandability with all “Powered by AmpliTube” software and Sonoma Riffworks™ T4 for immediate recording/composing/online sharing with your Mac or PC. The StealthPedal and the included plug-in is also compatible with all popular DAW software supporting ASIO and Core Audio drivers on PC and Mac.

Additionally when used with the “Powered by AmpliTube” software the system can be expanded to nearly 200 gear models including the all-time classic, exclusive sounds of Ampeg®, Jimi Hendrix™ and the just announced Fender® edition.
All of this makes the StealthPedal the most convenient, complete and expandable solution on the market, for playing/recording guitar and bass with the computer.

For more information, visit their web site at www.ikmultimedia.com.