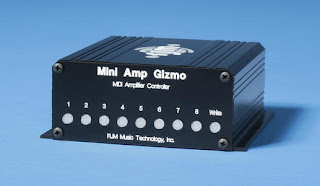 RJM Music Technology has some very interesting products at NAMM this year. I’m especially interested in the Mini Amp Gizmo, a smaller, less expensive version of the regular Amp Gizmo. I’ve often toyed with the idea of having my Marshall DSL50 modded so I can switch between Clean and Crunch modes, and if I combine this with the Amp Gizmo and a MIDI switch I’ll be totally set.

If I was to combine that with the Effect Gizmo, I’d probably never leave the house again. I’d just be standing in front of my amp and pedal board, tweaking and riffing until I’m old and grey.

Here are the press releases:

RJM Music Technology, Inc., makers of the RG-16, Amp Gizmo and Mastermind, has announced the Mini Amp Gizmo, a size and cost reduced version of their popular Amp Gizmo product.

“In talking to many of our users, we found that the majority of them used their Amp Gizmos to control one multi-channel amp. By producing a MIDI amp controller specifically for that purpose, we were able to reduce both the size and cost of the product.” says Ron Menelli, RJM Music President and Product Designer.

RJM Music produces a wide range of amplifier interface cables that allows the Mini Amp Gizmo to control most amplifiers on the market – more than any other switcher available.

RJM Music Technology, Inc., makers of the RG-16, Amp Gizmo and Mastermind, has announced the Effect Gizmo, the newest switcher in the RJM Music lineup. With this switcher, guitar players can connect up to twelve pedals or effects processors and can control them from any MIDI controller.

“This is the perfect solution for the player that prefers using a simple amp, but uses a lot of pedals to get a wide array of tones,” says Ron Menelli, RJM Music President. “We’ve put as many loops as we could in a single rack space, added stereo capability on the last four loops, and added our Click Stopper technology to drastically reduce switching noise.”

The Effect Gizmo also contains the features that made the RG-16 a favorite of musicians worldwide, including the acclaimed high-quality audio buffer circuit and the simplest user interface found in an audio loop switcher.

For more information, visit their web site at www.rjmmusic.com.