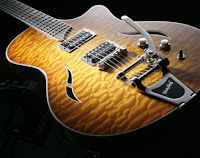 Last year I reviewed one of those awesome new Taylor solidbody guitars for Mixdown magazine. Its Gretsch-inspired pickups sounded so great that they prompted me to order the similarly-voice Dimarzio EJ Custom pickups for my custom Ibanez project (which I still haven’t finished, boo). Anyway, my point, even though it’s taking me a while to get to it, is that Taylor’s electric guitars are amazing.

Following the success of the T5 and SolidBody models, and born from a love of innovative design and classic electric tone, Taylor Guitars is expanding its electric line with the company’s first purely electric semi-hollowbody guitar, the T3.

Melding the sleek lines and shape of the T5 into a semi-hollowbody, the T3 features an expertly crafted body of sapele, topped with quilted maple. A svelte neck of tropical American mahogany sports heftier fret wire for a truly electric feel, while brilliant chrome hardware adorns the T3 for a ready-to-rock look that screams electric, vintage and cool.

While the T3 offers plenty for any player on its own, the designers at Taylor decided to take the new line up a notch in a variation, the T3B. Marking a first for the company, the T3B includes an authentic Bigsby Vibrato (model B70). The T3B incorporates a roller bridge for high performance, allowing the player the independence in setting the intonation of each string and eliminating the “dragging string” sound so commonly found in fixed bridges. The standard T3 model comes with a stop tailpiece.

“This is one rockin’ guitar that produces sounds our SolidBodys and T5s don’t have. When you do something that looks good, that’s one thing, but when cool sounds start coming out, you go, ‘Man, that’s just it.’ We knew this guitar was too good to hold back,” shares David Hosler, lead designer.

The new model includes Taylor’s Style 2 humbuckers which are specially positioned to capture the T3’s fidelity and range of tones. A three-way switch covers three standard configurations of pickup switching and as an added twist, coil splitting is available for both humbuckers by pulling up on the volume knob.

The control knobs, located in the traditional electric position below the bridge on the lower bout, function as push-pull pots. Pulling up on the volume knob activates a coil splitter, which turns the humbuckers into single coils. The tone knob is also a pull switch, which when pulled engages a second capacitor.

Hosler explains, “In the down position, one capacitor punches up the mid tones. Then when you pull the knob up, it adds another capacitor on top of it and uncorks a warm, fat, mellow old-school jazz tone. In between these two voices, this guitar spans the spectrum from traditional, hard rock to jazzy fusion. Even when overdriven, the air, articulation and distinction of all notes are there.”

The T3 is available in a high gloss finish to highlight the naturally lustrous color of the quilted maple or in a variety of sunburst colors. Strung with Elixir light gauge electric strings with NANOWEB® coating (” target=”_blank” ref=”nofollow”>), the T3 comes ready to gig in a hard shell Taylor case.

The T3 and T3B will be available domestically in mid-February and internationally in early spring 2009.