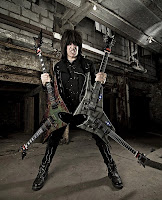 Michael Angelo Batio may be most visible as ‘that guy with the double guitar,’ a high-speed virtuoso with a cool gimmick, but he’s much more than that. A long-running Guitar World columnist and a former guitar teacher, he’s dedicated to all aspects of guitar playing: It just happens that he hit it big with his ultra high-speed picking and wild over-and-under-the-fretboard technique. Recently, journalist Joe Matera and I sat down with Michael Angelo backstage for an extensive interview. You can read Joe’s account of the discussion HERE at Ultimate Guitar.

IHG: What is it that attracted you to Dean guitars?

BATIO: The reason I’m such an advocate of Dean guitars, it’s not just an endorsement, it’s what I’ve really used. Back in my career I’ve tried not to do too much company-hopping to get guitars. For example, my first promo shots are Dean. Then Dean’s owner, Dean Zelinsky, was more of an artist than a businessperson, so he couldn’t keep it running, but he made these fantastic guitars. So he sold the company. So I went with Wayne Charvel, but Charvel annexed with different companies, so Charvel through BC Rich, Charvel through Gibson, then Charvel’s own company. Then I went with Washburn because Charvel went out of business, then I went back to Dean because that was home.

IHG: So what do you look for in a guitar?

BATIO: I wanted to be different. I wanted to be unique. Not to be better than other guitar players, but really, I play different, I came up with different things live, I just wanted to be unique and have my own voice. Dean came up with the ML shape. That’s the baddest-ass metal shape there is! And it’s a Dean! I like Gibson Les Pauls, I like Strats, but I mean, you’ve got Angus Young playing an SG, you’ve got Page playing a Les Paul, you’ve got Jimi Hendrix playing a Strat, and I wanted to play something different. Dimebag felt the same way. So that’s how I started using Dean: Their shapes were really cool, they’re high-quality USA, and they came up with this – it was called a blueburst, this dark blue into light blue burst finish, and that guitar just freaked me out. I looked at it on the wall when I was teaching guitar at a music store in my home town of Chicago, and “I gotta have that guitar, man!” So that’s how it started.

IHG: Some people like the guitar to fight them. Others like it to get out of their way and let them play. How do you prefer your string action?

BATIO: If you listen to my sound, I’m the opposite of the Dimebag midrange scoop. In fact, my EQ is so midrangey, and I like that, but the way I get that is my action’s actually pretty high. I don’t use low action, in fact these guitars are set up so low here in Australia that I had to have them raise the action. But that’s my tone. Higher action doesn’t stop me from playing fast.

JOE MATERA: When it comes to speed playing in general, what do you think are the integral elements a guitarist needs to be aware of?

BATIO: I would say that in order to play fast, you have to first learn how to play slow. It is all about coordinating both of your hands so that they’re able to play together. I used to make my students play slow first. I learned this technique from having taken piano lessons and I used that to teach speed playing on the guitar. When you slow it down and force people to physically and mentally concentrate, it gets more ingrained in their heads and because of that, they can become a better and fast player. And only then would I show them other exercises. So it really comes down to the discipline of concentrating on what you’re doing really slowing and getting that right movement correctly. I did a study of lot of different guitar players and found that though there are some that pick from the wrist or elbow, I found that its not that important. The majority of players like Yngwie Malmsteen, Paul Gilbert, John Petrucci, Vinnie Moore, myself and anybody who plays really fast and accurately, when they’re playing medium to fast speeds, they never move their thumb and index finger. So it doesn’t matter if you use your wrist or elbow, what matters is the motion of your thumb and index finger. It has got to stay stationary. There are exceptions to the rule though but 95% of all guitarists do use this common technique.

IHG: What about when it comes getting a guitar tone, what do you look for?

BATIO: For me I have to separate it into three sounds; distortion rhythm, distortion lead and, clean. Mesa Boogie Dual Rectifiers are cool for my distortion rhythms but because they don’t have the mid range that I like for lead playing, I usually gravitate towards Marshalls for my leads. And for clean sounds, you can’t beat any old Fender amp. So what I look for is a really good mid-range tone. My lead guitar tone doesn’t have a lot of bass and a lot of treble, but it does have a lot of mids which in the process creates a lot of presence. You know for humans, even if you’re hard of hearing you will always hear the mids. I have people say to me all the time how clean my guitar sound is and it is because there are so many mids in the tone, that when you play live it really becomes more present. I used to get so pissed at all these engineers, as whenever we would record and mix an album, they would then master it and add all this brightness to it. And it made my tone too bright. I was like, ‘No that’s not my tone, I don’t want a bright guitar sound. I want bright drums and cymbals’. So ever since, I have not been a big fan of mastering.