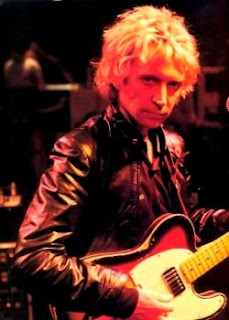 Recently packing out enormodomes for the Police reunion shows, Andy Summers has done it all, from 60s psychedelia to 70s punk, to fusion and jazz. Those who caught Summers on his 2000 jazz trio tour like I did (with Toss Panos from Mike Keneally’s Beer For Dolphins on drums, woo!) would have seen him playing dizzyingly complex lines on a Gibson ES-335, but as great as his jazz skills may be, he’s held in the most high esteem for his classic work with The Police.

There was some controversy over Summers’ tone when The Police first surfaced. At the time, Eddie Van Halen was revolutionising the guitar by cranking a Marshall and playing guitars fitting with just a single humbucker and a volume pot, with the occasional effect thrown in, usually just to emphasise a few notes in a passage (like the flanger sweeps in ‘Unchained.’ Summers, in comparison, was criticised by some corners of the guitar community, including Van Halen himself, for just playing “Flangy chords” (a criticism EVH would later retract in admitting he was influenced by Summers on the Van Halen III track, “Dirty Water Dog”).

Throughout his time in The Police, Andy Summers’ most visible guitar was a 1961 Fender Telecaster with an alder body and maple neck, although he also played a Fender Stratocaster and a variety of Hamers. The guitar was heavily modified when Summers bought it in the early 70s. Modifications included a high output humbucker in the neck; a brass bridge plat and bridge saddles; an inbuilt preamp and overdrive; a phase switch; and Schaller tuners. The bridge pickup was mounted directly into the body instead of to the bridge plate, a modification which some believe adds more fullness, resonance and sustain to the tone.

Summers used Marshall half stacks, despite being a predominantly distortion-free player. The added toughness of a cranked but still clean Marshall allowed his sound to cut through the mix in a way unattainable with a pristine, hi-fi sounding rig.

For effects, Summers favoured Echoplex tape delays, and a variety of chorus, delay and flanger pedals. To attain a Summers-like tone for yourself, try running single coil pickups on individual settings for the sharper stuff like “Roxanne” and “Bed’s Too Big Without You,” or in combinations for that zingy “Walking on the Moon” tone. Try to retain some edge and toughness – don’t let the tone get too pretty. Keep your amp’s preamp gain low but don’t be afraid of the power valve overdrive created by cranking the amp. One way of keeping the sound from being too ‘nice’ is by using the chorus and flanger into the amp’s input, whereas traditionally they might go in an effects loop or towards the end of a signal chain into a very clean tone.

If you’re working with a modelling device, make sure you select models of tape echo, Marshall Plexi, and more analog styles of chorus rather than more electronic-sounding ones. If you can move effects within the signal chain (either in a modeller or with real pedals), try the chorus as the first effect, perhaps even into an overdrive pedal with the gain control turned right down and just used as a tone shaping device. Also try some light compression – I prefer the MXR Dyna Comp but there are other more transparent models out there too.

CLICK HERE to search for Fender Telecasters on eBay.