When Taylor debuted the stunning T5 hybrid acoustic/electric guitar, guitarists the world over thought it was just a matter of time before the company unleashed its first fully electric, solidbody guitar. Never one to do quite what’s expected of it, Taylor didn’t release its first solidbody electric: instead they launched their first three solidbody electrics, all at once, each a little bit similar but a lot different.

At first glance the SolidBody Custom might look like a conventional single cutaway electric, but appearances can be deceiving. The first hint that this is something a little different is the neck joint: a single bolt affixes the neck to the body. This system is surprisingly stable, and seems to result in a much smoother transfer of vibration from body to neck, which in turn creates more sustain than typical four or five bolt attachment.
The body itself is heavily chambered, with only the area under the bridge remaining fully solid for maximum string vibration transfer. The rest of the body (or lack thereof, since we’re talking about hollow sound chambers) conspires to add layer after layer of harmonic complexity.

Other ‘look a little bit closer’ features include the unique Taylor hard tail bridge, with height adjustment through the back of the guitar, and a clever fused string ground, in case a faulty ground ever tries to get one over on you. Don’t worry: if the fuse is ever tripped, the guitar will still operate, but it might be a little bit noisy until you replace it. Small price to pay to eliminate the risk of frying one’s lips off due to the combined effects a dodgy microphone and a puddle of beer on stage.

The pickup height adjustment is also accessed from the back of the guitar, keeping the front nice and clean, free of busy-looking adjustment screws. The single volume and tone controls look elegant and feel very sturdy, and the five way pickup selector gives you the following settings: 1: full neck pickup. 2: inside coils of both pickups in parallel. 3: full neck pickup and one coil of the bridge pickup. 4: Two inside coils in series. 5: Full bridge pickup.

One especially useful feature is the tone control. For the first two thirds of its travel it functions like any other master tone control, but get into that final third and it increases midrange ‘honk’ just like a stationary wah pedal. It’s an ingenious design, and one which increases the guitar’s already impressive list of features to near revolutionary levels. Once I started investigating this feature, I must have kept the tone control all the way down for about an hour, experimenting with how this tone interacted with the guitar’s sustain and harmonics at different points on the fretboard.

The SolidBody Custom’s tones are very complex and bright. The chambered body seems to add an extra dimension to the sound not only unplugged (I swear it’s the loudest electric I’ve ever heard acoustically), but also through the pickups. The bridge pickup has a toothy bite with lots of subtle overtones and a healthy but not overbearing amount of string sound (I hesitate to use the term ‘string noise’ because that implies negative connotations, of which I mean none), and the neck unit has a warm and bright jangle. It’s almost like playing a Paul Reed Smith but hearing a Gretsch. The guitar excels at rock, jazz and fusion tones, and even sounds great at ultra high gain levels, where you wouldn’t expect these pickups and this guitar to thrive.

In all honesty, this is one of the best guitars I’ve ever played, and I can only hope that one day I can get my hands on one to keep. Taylor has made a stunning entry to the solidbody electric guitar game. Time will tell if the market is ready to accept Taylor as an electric guitar builder, but with a guitar this cool, if any acoustic maker can cross over, it’s Taylor. 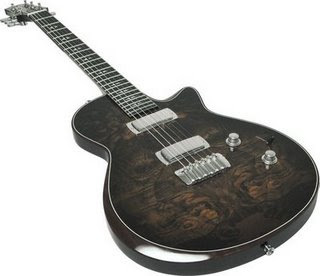