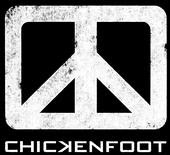 Personally I like it. Kinda reminds me of some of Sammy’s rockier solo stuff, but with Satch wailin’ away and some cool solid Mike Anthony bass playing. Can’t wait to hear the rest of the album.

According to Blabbermouth, CHICKENFOOT, the “supergroup” featuring members of the RED HOT CHILI PEPPERS and VAN HALEN, played a private concert on March 18, 2009 in Southern California for employees of Best Buy.

CHICKENFOOT will release its self-titled debut disc this spring. The first single from the CD will either be “Oh, Yeah!” or “Bitten By The Wolf”. The band will also hit the road in May in support of the album, hitting clubs in the U.S. first, heading to Europe during the summer, then coming back for a larger North American run in the fall.

The group plans to perform songs from each of its members’ careers in addition to tracks from the CHICKENFOOT album, so fans will get to hear songs from VAN HALEN, the CHILI PEPPERS, Satriani, and Hagar’s solo catalog.

CHICKENFOOT will appear on the cover of the June issue of Guitar World, due out on April 7.