At the risk of sounding like Jerry Seinfeld, what is the deal with Chris Cornell’s new album? As you might know by now, it was produced by Timbaland and the PR machine says the album “showcases a new, seductive sound — dark, multi-layered and full of puzzles and surprises. The songs bring a new cinematic scope to Cornell’s performances, with potent visual imagery echoing the non-stop musical assault from his internationally acclaimed live band.”

Now, I have no beef with that, really… I guess. I mean, I loved Queensryche singer Geoff Tate’s solo album

– freaking loved it – and the same ‘dark, multi-layered etc’ comments could be made about that CD. But my problem with Cornell’s CD is the cover. Let’s have a look at it. 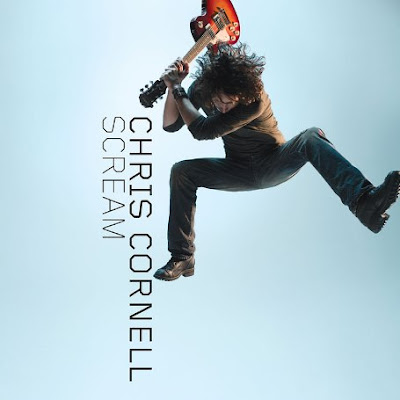 Do you see what I see? Yeah, he’s smashing a left-handed Epiphone. First of all, Epiphone make fine guitars at all price points and aren’t deserving of such harsh treatment. Secondly, Cornell tends to play Fenders and Gibsons, certainly not Epiphones. Thirdly, it’s freaking left handed. This leads me to one of three conclusions:

1) They spent so much money on hiring Timbaland that the only guitar they could afford to buy and smash for the cover was a secondhand, lefthanded Epiphone from a pawn shop,

2) Cornell is so enraged by the negative response to the album by longtime fans that he snapped, stole some kid’s guitar and crunched it into the floor.

3) They bought an Epiphone for a couple hundred dollars, and whoever designed the cover thought it was more aesthetically pleasing to flip the photo, thus insulting guitarists everywhere. I dunno about you but I see it as a huge mark of disrespect when stuff like this happens. For instance, a few years ago there was a Savage Garden live DVD