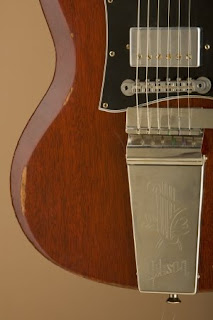 Here’s one that’s bound to get my fellow classic rock nerds in a flap. Gibson is offering a limited edition Inspired By Robbie Krieger SG which combines elements of some of the Doors guitarist’s favourite instruments. Here’s a little of what Gibson has to say about it:

The new Inspired By Robby Krieger SG from Gibson Custom blends several features from some of Krieger’s favorite SGs into one stunning new model. Made of traditional solid mahogany, the body of the Krieger SG is typical of the thin SG bodies from the mid 1960s, complete with traditional beveled edges and the distinct dual sharp cutaway horns that give players complete access to the guitar’s full 22-fret rosewood fingerboard. The body is then finished in Krieger’s personal favorite Aged Dark Heritage Cherry finish, which is very similar to the finish of his beloved 1967 SG Standard, and historically accurate right down to the tiniest scratches, dings and belt rash. The neck is also a typical SG one-piece mahogany neck, but with a hybrid neck profile modeled after the neck on a 1961 Gibson SG owned by a close friend and the neck on his personal ’67 SG Standard.

In order to duplicate Krieger’s signature sound on song’s like the Doors’ classic “Roadhouse Blues” and its easily identifiable opening guitar lick, Krieger chose a pair of Gibson’s renowned ’57 Classic humbucker pickups. Gibson’s original “Patent Applied For” humbuckers of the mid- to late-1950s — some of the most sought after pickups in the world — were wound using imprecise machines, resulting in pickups with slightly different output and tone, and desirable to players who wanted to mix and match and explore a complete spectrum of tonal possibilities. The ’57 Classic pickups are the result of Gibson’s drive to capture and recreate this renowned characteristic. Krieger’s signature sound comes through clearly in a warm, full tone with a balanced response, packing all the tremendous “PAF” humbucker crunch expected from a Gibson humbucker. 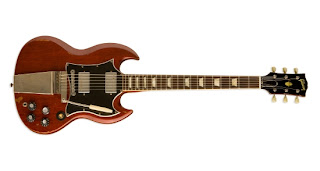 Everything else on the new Inspired By Krieger SG is classic Gibson SG Standard, including the ABR-1 Bridge and Maestro tailpiece tremolo system, nickel hardware, 22-fret rosewood fingerboard with figured acrylic trapezoid inlays, and vintage tulip tuners. The new Inspired By Robby Krieger SG Standard is destined to become of the most popular SGs ever produced by Gibson Custom, but it will only be produced in a very limited run of only 150 guitars — 50 aged to look exactly like Krieger’s, and 100 with Gibson Custom’s V.O.S. finish treatment. Each guitar will come with its own Gibson Custom case, custom care kit, and a certificate of authenticity signed personally by Krieger. But they won’t last. Click here to find the nearest authorized Gibson Custom dealer near you, and experience the power and legacy of the new Inspired By Robby Krieger SG.