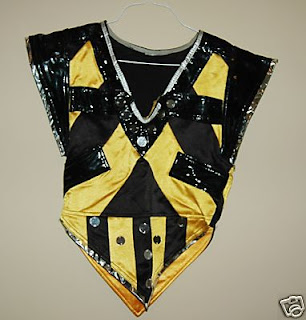 Speaking of interesting things on eBay, check this out! Stryper bass player Tim Gaines is selling one of the black and yellow striped vests from the band’s heyday. A must-have for collectors or anyone who wishes to look like a heavy metal bumblebee!

On the auction page, Gaines says “I was the bass player for the Rock Band Stryper from 1983 through 2004 when I retired. I have a whole wardrobe full of these costumes that I will obviously never wear again (at my age) and taking up much needed space, I thought I would offer them to someone who would appreciate them better than I – whether fan, collector, museum or ?

Up for auction is one of my OFFICIAL SPANDEX STAGE COSTUME TOPS – Worn by BOTH ROBERT SWEET and myself TIM GAINES. This is absolutely a RARE ONE OF A KIND ROCK MUSIC COLLECTORS ITEM. This spandex top was worn by both Robert and myself during the years 1984 thru 1986 on several Stryper world wide tours. It was also worn by Robert Sweet as seen on the album cover for our single Together As One as well as a promo photo of the same picture that was circulated to press and the Stryper fan base. This top was created by clothing designer Tina Henderson, who also created many of the first Stryper costumes in 1984 and 1985. Again, this is absolutely RARE ONE OF A KIND ORIGINAL stage costume.”