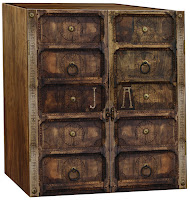 The Jane’s Addiction box set A Cabinet Of Curiosities is out today. Here are some fun facts from the press release:

Deluxe: Housed in a collectible, limited edition wooden box designed after an old-fashioned “CABINET OF CURIOSITIES.”

Disc 2 highlights include previously unissued demos for “Ted, Just Admit It…” and “Maceo,” a 12” remix of “Been Caught Stealing,” the Grateful Dead cover “Ripple,” a rehearsal of “My Time” and rare and unreleased 1987 live cuts including the band’s concert staple “Bobhaus” and a roaring version of Led Zeppelin’s “Whole Lotta Love.”

The band was legendary for their live shows, and Disc 3 presents a complete concert recorded on December 19, 1990 at the Hollywood Palladium including peak-form unreleased performances of “Mountain Song,” “Whores,” “Ocean Size” and “Been Caught Stealing.”

DVD Disc 4 opens with Fan’s Video: Soul Kiss, previously unavailable only on VHS—selections include the MTV-banned video for “Mountain Song,” a clip for “City” and candid footage of the band.
Also features all eight music videos from Nothing’s Shocking and Ritual de lo Habitual plus a trio of unreleased 1990 performances taped in Milan for MTV Italy.