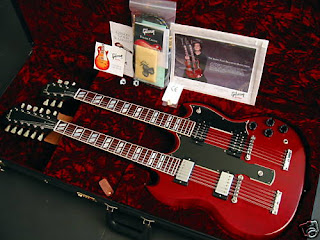 I was just reading this article on Blabbermouth.net about how Jimmy Page autographs are becoming very highly sought after, with Page not agreeing to sign much these days.
Blabbermouth cites a HoundsTV article about the best and worst autograph signers of 2008 which says: “On Robert Plant and Jimmy Page (LED ZEPPELIN): “While they were not touring together, founding LED ZEPPELIN members Robert Plant and Jimmy Page arrived in Toronto within weeks of each other during 2008. Plant, on tour with Alison Krauss played a summer show, and Page came to the Toronto Film Festival weeks later to support a film. Page announced on arrival at TIFF regarding autograph requests, ‘I’m kinda finished with that,’ and stuck to his word. Robert Plant was equally dismissive the few times approached by collectors over the course of the couple of days he was in Toronto. By mutual agreement among many, Page and Plant were the worst rock-god signers to come though during the year. Autograph collectors went home with their LED ZEPPELIN memorabilia unsigned during 2008.”
Personally I’d rather sit down and have a chat with Page over a pot of tea than have his autograph, but to each their own.
Perusin the ‘bay for Page autographs just out of curiosity after reading the article, I stumbled across this Gibson Custom Shop Jimmy Page VOS Double Neck (pictured above), which comes with a signed certificate and is a bargain at US $6,595. Man I hope this gets sold to a guitarist who will play the hell out of it rather than a collector who will keep it locked up.