Anyone with an eye to music video shows or channels will recognise this guitar from the Foo Fighters video for ‘All My Life.’ Music fans with a slightly longer memory may recall these flashy instruments in the hands of Keith Richards, Leslie West, Paul McCartney, Cream’s Jack Bruce or Black Sabbath’s Geezer Butler. Let’s go through the plexiglass to see what’s on the other side. 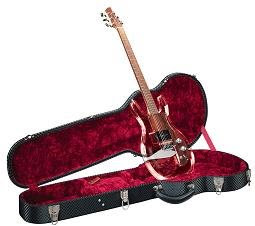 X RAY SPECS
This version is a near-exact replica of the original Ampeg model designed by Dan Armstrong, dating back to 1969. It differs from the originals by way of an improved neck joint, as well as a compensated rosewood bridge designed for regular string sets with three wound and three unwound strings – the original’s bridge was compensated for a wound G string, and evidently Ampeg felt that remaining vintage-faithful in this instance would compromise tuning for the majority of players who favour contemporary string sets.

The double cutaway Plexiglas body certainly looks cool, but there’s a method behind this madness. The theory is that the density and uniformity of the body material eliminates unwanted vibrations and frequencies, improving sustain by transferring the string vibrations uninterrupted by the variations in grain and density that you might find in wood.

Another very interesting feature is the removable pickup system. Out of the case, the Dan Armstrong is fitted with a Rock Sustain humbucking pickup, but a single coil Rock Treble pickup is also included. Each are designed by Kent Armstrong, who designed the original’s pickups in the 1960s and 70s. The pickups simply slot into the body and are secured by a few thumbscrews. Electronics consist of volume and tone controls, plus a 3-way tone switch. The centre position bypasses the tone circuit completely, while the other two positions shift the frequencies affected by the tone knob.

The neck is hard maple, with 24 frets on a rosewood fretboard. Die cast Grover tuners are positioned for almost perfectly straight string pull, and are close-coupled to minimise string tension differences.

I CAN SEE CLEARLY NOW
I plugged into my all-valve half stack, set to a vintage, edgy but clear tone, and let ‘er rip with some Bowie riffs. The first thing I noticed was the unique attack of the notes, compared to a more conventionally constructed guitar. There was a satisfying chunk and chirp to the pick attack, followed by a kind of opening up of the tone. If you hold a note, it seems to start out compressed then spread out, sustain for a while, then gradually fade away. With some smooth Tube Screamer overdrive, the Ampeg reminded me of Trey Anastasio’s main solo tone in Phish. The tone switch was handy for emphasising different overtones in single note lines, but for pure classic chunk the guitar sounded best in the centre position. Swapping to the single coil pickup, a bright, almost P90-ish jangle was attainable, and was especially great for blasting out “Jean Genie.”

TRANSPARENTING
While the looks are likely to divide players, the construction quality and tone of this guitar are undeniable. Fortunately, if you don’t like the clear look, Ampeg recently announced the AMG100 series, which replaces the acrylic with swamp ash, mahogany or alder, but you owe it to yourself to check out the attack and sustain characteristics of the acrylic version. 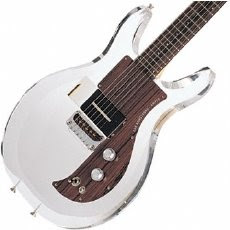 CLICK HERE to buy the Ampeg Dan Armstrong from Guitar Center for $1,499