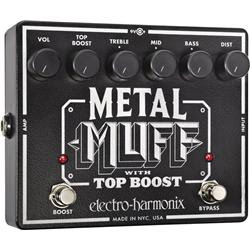 The Electro-Harmonix Big Muff Pi is one of the most famous fuzz pedals in existence, and is used by both guitarists and bass players from many genres to add some welcome grit and harmonic fatness to their sound. There have been a few variations on the basic Big Muff sound and design over the years, including the Double Muff and Mini Muff. Now the Metal Muff takes the basic sound and twists it like a chunk of iron into a formidable metal beast.

The Metal Muff is a respectably large pedal with six pots – Volume, Top Boost, Treble, Mid, Bass and Distortion – and two footswitches. The switch on the right either turns the effect on or bypasses the circuit completely. The left switch kicks in a variable top boost, though only in effect mode, not in bypass.

Power is supplied by a 9v DC adaptor, with battery access through the bottom of the pedal by removing the bottom plate. Like other pedals in the range, it’s not an ideal solution, but a bit more stable and robust than some designs on the market. That said, I’d probably choose to run the Metal Muff with an adaptor rather than batteries just for convenience.

Visually, the Metal Muff looks like it belongs on the cover of an Iron Maiden or Judas Priest vinyl LP cover, being held by an armour-clad hand bursting from the chest of a zombie. The chunky chrome knobs call to mind a particular valve amp commonly used in metal, the black casing screams ‘apocalypse’ and the sharp, angular typeface used for the main logo is as aggressive as the tones inside.

And what tones they are. The Metal Muff is not a subtle pedal. There is so much bass on tap that it’s easy to swallow a drummer and bass player whole with this pedal. I found the best setting on the bass control was somewhere around mid way, to retain some punch and definition without eating up the rest of the band. The midrange control is best used to define the general body of the sound, focusing on a frequency which seems more suited to rhythm than lead styles, while the treble control is best used in combination and balance with the top boost. You may find that the top boost works for a biting rhythm sound, while turning it off will round off the tone nicely for leads. Or perhaps doing it the other way around will work for your sound. Either way it’s a handy extra level of flexibility.

The basic thrust of the sound is squarely in the Anthrax/Metallica zone at medium high gain levels. Crank it up a little further, suck out the mids and you’re in Pantera country. Raise the mids, turn off the top boost and back the treble back to about 9 o’clock and you have a dry but cutting “New Wave of British Heavy Metal” tone.

It would have been great to be able to select the treble section alone to add a bit more sparkle and edge to a dark sounding guitar without the distortion engaged, or to attain a bit of that late 60s distortion sound, where an overdriven amp was hit with a treble boost to send it further into natural distortion. You can approach this sound by keeping the tone controls neutral and turning the distortion all the way down, but if you wanted to do this it would be extra cool to be able to kick the distortion in and out separately for solos.

The Metal Muff is a very usable new spin on the classic Big Muff sound. Sure, it’s squarely aimed at the metal crowd, and you’d have a hard time finding a ‘polite’ lead tone for more subtle styles, but it does what it’s designed to do admirably and with style.

CLICK HERE to buy the Metal Muff with Top Boost from Music123.