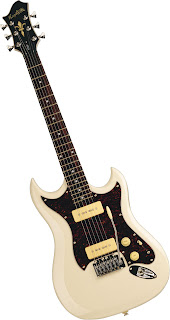 I originally wrote this review for Mixdown magazine in 2006, and a little discussion with Lewis from the Me And Mace: Japan Guitar Journeys blog on Twitter today reminded me of how cool this guitar is, so I’ve decided to post the review here.

Sweden’s Hagstrom began making electric guitars in 1958, transferring glitzy features like sparkly and pearloid celluloid finishes over from their successful line of accordions to create a very successful line of guitars. The resulting solid and hollow body axes and a series of basses, including an extremely cool eight string version played by Jimi Hendrix, became instant collector’s items the second the company ceased production in 1983, but even before then the guitars found their way into the hands of a diverse range of artists including Elvis Presley in his 68 comeback special, Bill Nelson of Be Bop Deluxe, Dusty Hill and the Reverend Billy F. Gibbons of ZZ Top, Pat Smear from Nirvana and Foo Fighters, and the legendary Frank Zappa, who posed with a Viking acoustic and a H12 electric 12-strings for Hagstrom advertisements in the 60s. David Bowie even used one on “Space Oddity.” Today Nicholas McCarthy from Franz Ferdinand plays a vintage 1959 sparkle red P46 Sweetone. And if that’s not enough for ya, ABBA used them too.
CLICK HERE to see Hagstrom guitars on eBay.
Flash forward to 2004, and the Hagstrom brand is revived, with manufacturing sourced worldwide. The new wave of Hagstroms tap into the same retro flash as the prime vintage guitars, but a number of technological improvements bring the designs into the future. All Hagstrom guitars feature the H-Expander truss rod, which uses a lightweight alloy rod mated to a unique solid channel to provide tension at either end and along the entire length of the neck. All fretboards are made from a homogenous wood composite called Resinator which the company claims does away with the inconsistencies of solid wood while mimicking the tonal characteristics of ebony.

I reviewed the F-200p, a funky little guitar that comes across as a marriage of all the fun bits of a Gibson Les Paul Jr, SG, Fender Strat and even ESP Viper. The body shape is vaguely SG or Viper-like, with similarly pointy horns and classy bevelling on the front and back of the body. The mahogany body’s thickness and weight are more like a Les Paul Jr, as is the twin soapbar pickup configuration. The pickups, Hagstrom’s own Alnico 5 magnet H-90 soapbars, have an aged cream colour which complements the crisp crème of the body and the back of the set nato neck, and is matched by similarly aged volume and tone pots. The oversized tortoise shell pickguard is immaculately cut, and the rear cavity cover features clever triangle cut-outs to give access to the trem spring screws without having to remove the plate. The headstock features the classic Hagstrom shape (something like an industrial Gumby), set off with classy but understated pearloid binding, logo and decorative inlay. It actually looks like the whole headstock face is covered in a two ply overlay of pearloid material then painted over with some kind of stencil to mark out the pearloid features, which is more than likely at this price point, as full inlay work would jack up the price. The headstock features Hagstrom-branded tuners with extremely cool art deco style buttons which look similar to those found on some versions of megabuck D’Angelico New Yorker jazz boxes. 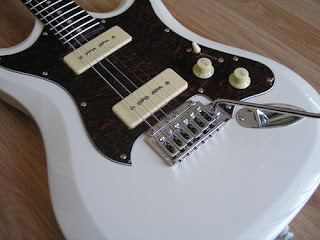 But the coolest feature as far as I’m concerned is the Full Contact trem system. A simple push-in bar with a Strat-style white plastic tip is tension adjustable, and the bridge is anchored to the body via four screws which, like all vintage-style trems, can be adjusted to provide more play, or screwed down tight to get closer to a fixed bridge vibe if whammy isn’t your thing. The bridge saddles are a design I’ve never seen before, with the strings sitting on a screw-in section which rises about 5mm higher than the top of the saddle bases, keeping the strings at a Les Paul-like break angle for better sustain and tonal transfer while providing the playability of a Strat. In operation, the bridge stood up to some pretty wild whammy bar abuse and just wouldn’t go out of tune no matter what I dished out, from divebombs to EVH-style dips and scoops to race car and piggy noises. Yet due to the subtle float of the review model’s bridge and the snugness of the bar in the socket, I was also able to get dead-accurate shimmery Bigsby sounds, which blossomed to full life with a few carefully chosen open strings and the added influence of those soapbars.

I’ve always found soapbar-style pickups to be extra sensitive to changes in picking dynamics, and these were no exception. The bridge pickup is set pretty much as far back as it could possibly go, emphasising the snappiness characteristic of the bridge position to gloriously grungy effect. The larger than average distance between the bridge and neck pickups makes the contrast between the two tones even more pronounced, and the middle setting jangles like a hardcore Telecaster. Within ten minutes of plugging the F-200p in, I’d already written two new riffs, inspired by the glassy shimmer of the soapbars. I’m a firm believer that every guitar has a new song or two lurking within it, and to find them within the first ten minutes is pretty inspiring. Delving deeper though, I was able to conjure up great Stonesy tones, some pretty awesome slide guitar sounds, and, when rolling off the tone knob and switching to the neck pickup through high gain, a dangerously close approximation of Randy Bachman’s “American Woman” tone. Huge variations in tone were possible by varying pick attack or switching from pick to fingers, and particularly country chicken pickin’ licks sounded great.

The Hagstrom F-200p would be a great studio guitar due to its sheer versatility, and its cool retro styling make it a great indie axe. It’s more suited to jangly chords and ringing single note lines rather than fleet-fingered shred-fests, but with those sweet sounding soapbar pickups you wouldn’t want to get too noodly anyway because you’d miss all the tonal nuances. But if, for some bizarre reason, soapbars aren’t your thing, other versions feature humbuckers, single coils, or combinations of the two.