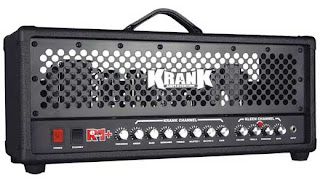 The Krank Revolution + has a lot in common with the Dimebag Darrell signature model, the Krankenstein – after all, Dime was swayed over to Krank by the Revolution, and it was this amp that he used as the basis for his own model. While the Krankenstein is a savage, mega-high-gain beast fit for the metal mayhem created by Darrell, the Revolution is a more versatile creature, designed to be many things to many players, instead of the ‘two things to one player: ultra clean and mega distortion’ brief of the Krankenstein.

CLICK HERE to buy the Krank Revolution Plus on eBay.
SPEC CHECK

The Revolution + has two channels, ‘Krank’ and ‘Kleen.’ Krank has a 3 band EQ (treble, midrange and bass), two footswitchable master volumes and a parametric sweep control which shifts the focus from bass and treble-heavy metal bite to midrange-thick hard rock. The Kleen channel has a similar 3 band EQ and a volume control, as well as a Boost button which adds grit and sparkle to this otherwise spotlessly clean channel.

The ‘plus’ indicates that the Revolution + has a few changes since its first incarnation. A more powerful transformer is the first clue, creating greater grunt and headroom. Gone are the original 5881 power valves, and in their place are four Sovtek 6550 valves, which are often used in valve bass amplifiers for their tight low end response, clear highs, and high headroom. Their use here skews the Revolution +’s gain generation ratio further towards ‘preamp distortion’ than’ power amp distortion.’ You will still get some colouration at higher master volume levels, but the amp is more likely to sound similar whether it’s at bedroom or stadium volume level. This also means the line out will give a more accurate representation of the amp’s sound than some other amps, because the power amp has less influence on the overall tone.

Normally with an amp like this I would go for the throat on the high gain channel straight out of the gate. I guess today I was feeling a bit more low-key, because I started with the Kleen channel using my Ibanez UV777BK 7-string. I was immediately impressed by the clarity and headroom of the channel, and it was ideal for those Metallica ‘One’ clean tones, especially Kirk’s clean solo tone on the intro. Hitting the Boost button immediately smacked me back into the world of guitar dirt, though. This is like a magic button which makes the amp and guitar seem to speak to each other as if they’re a single instrument. The high end was now sharp and angry, and the bass was punchy and tough. The midrange had just the right level of grind, and this channel will satisfy blues and country players as well as metal players who need a clean sound, but not TOO clean.

The Krank channel can cover a huge range of distortion tones, from classic rock to thrashy firestorm, but I pretty quickly zoned in on an almost identical facsimile of the Queensryche ‘Operation:Mindcrime’ rhythm guitar tone, one of my personal favourite rock sounds.

NOW THAT’S A PLUS

If I had to choose between the Krankenstein + and the Revolution +, I’d say ‘Viva la Revolution!’ While Dime’s amp does what it does extremely well, the Revolution just does more, and is more adaptable to individual playing styles. Its ability to handle a wide range of gain levels and to excel at each of them makes this a pretty exciting amp to play through, and one of my favourites of the last few years.