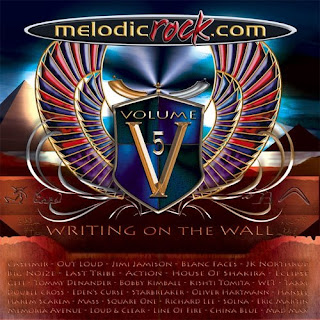 I’ve been visiting Melodicrock.com for – jeez, it must be about 10 years now. It’s a great source of information, especially if you’re a Van Halen fan, and I’ll be eternally grateful to the guy who runs it, Andrew McNeice, because he mentioned I Heart Guitar in a story on Melodicrock.com when my blog was only about 1 month old, increasing my traffic by about 500% for about a week when I was still just getting started.

Today Andrew has announced details of the 5th Melodicrock compilation CD. Here’s the short version but for the full details and to order the CD check out melodicrock.com.

MRCD5 – Writing On The Wall

I am very proud to announce the track listing and artist details for MRCD5 – Writing On The Wall, due for release Monday, July 6.

Pre-Orders will commence next Monday – June 1. As usual, those that pre-order will receive a stack of additional MP3 bonus tracks to download – several of which will also be exclusive tracks. Details for those will be announced Monday. Audio previews for the tracks featured below will be rolled out each and every day this week!

A huge thank you to the participating artists and thanks also to Richard Jones for the cover art (and the full CD package)!

Writing On The Wall features more exclusive tracks than any of the 4 previous compilations and I believe this is the most diverse musically, while also offering the most consistent song quality of all MRCD releases to date. As you may see, there are 3 spots still to be announced – just waiting for the final confirmation of track titles and will announce and preview those during the week ahead.

The 2CD set (36 tracks) will retail for US$23.00 – which includes airmail shipping to anywhere in the world.