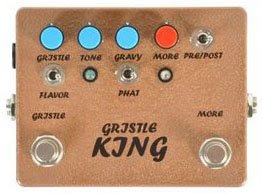 Check out this wild new Gristle King boost/overdrive pedal from T-Rex. A collaboration between technician Tim Jauerning and guitarist Greg Koch, this pedal revives the spirit of those early 90s DOD pedals (later reissued by DigiTech) such as the Death Metal

, which had controls labelled ‘Scream,’ ‘Guts,’ ‘Pain’ and ‘R.I.P’. The Gristle King’s controls are ‘Gristle,’ ‘Tone,’ ‘Gravy’ and ‘Flavour’ – so if ever you were dialing in a tone and you felt you needed more gravy, this pedal’s for you.

The Gristle King is a combination of the features of the DGTM and the Luxury Drive, offering a wide variety of boost and overdrive possibilities. Besides the controls that are also appearing on the DGTM (Gristle, Tone, Gravy and Flavour) and the Luxury Drive (MORE), the DGTM has two new toggles (Pre/Post & Phat). The Gristle King gives you two effects, plus extra tonal possibilities, in one compact unit.

The Gristle pedal line was born in the US as a result of the cooperation between technician Tim Jauernig and guitar player Greg Koch. T-Rex adopted the Gristle pedals and they are now official members of the T-Rex pedal family.

For more information, visit their web site at http://www.t-rex-eng.com.