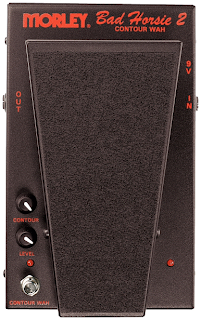 Legend has it there are few guitarists who are more demanding to design signature gear for than Steve Vai (see my interview with DiMarzio pickup designer Steve Blucher for more on this). You don’t rise to such technical and compositional levels of excellence without being extremely driven, and Vai’s demands on gear companies are the thing of legend. So when he turned to Morley to design a signature wah pedal, I’m sure a few white hairs sprung up on the heads of Morley engineers.

GIDDY-UP
The first cool thing about the Bad Horsie’s design is that it features switchless activation. There’s no chunky switch at the top of the pedal’s travel to stamp down on to start wah-ing. You simply put your foot on the pedal, and the effect engages. Take your foot off, and the wah effect tails off over a period of 1.5 seconds. Or you can pop the bottom off the pedal and adjust a tiny internal trim pot for your preferred off time, from instantaneously all the way up to 3.5 seconds.

The next design twist is the pedal’s operation itself. Instead of using an assembly to rotate a potentiometer when the pedal is moved like other wahs, Morley pedals use an Electro-Optical design which uses an LED light array and a light-sensitive sensor to control the wah sweep. What this means is that instead of stepping on the pedal to rotate a pot, stepping on the pedal brings the LEDs closer to the sensor, and the nearer it gets, the higher the wah tone sweep gets. The benefits are twofold: extremely smooth linear wah sweep, and best of all no pots to wear out and become scratchy and noisy. Some higher end tremolo and compressor pedals use similar technology to regulate the effect dependent on internal settings or the strength of the input signal, but it’s a logical fit for expression pedal effects.

The original Bad Horsie wah pedal – named after the opening track from Vai’s 1995 “Alien Love Secrets” EP – was a pretty big success, but because it was customised for Vai’s particular needs and rig, players wanted a little more flexibility. So the Bad Horsie 2 takes the exact sound of the original, and adds a foot switchable second mode, Contour mode, which enables the user to adjust Q and wah level.

More practical but by no means less exciting features are a Clear-Tone buffer circuit, which maintains a pure guitar tone and signal level whether in wah or bypass mode, and an easy access battery compartment which is simple to operate and extremely durable. It’s also a very heavy, robust unit, and its spring loaded design, while preventing traditional “set in one place as a tone modifier” techniques, is well suited to aggressive “stomp the bejabbers out of the pedal” styles.

PET SOUNDS
The Bad Horsie 2 is definitely not a vintage sounding pedal. Then again, could you imagine Vai going for a traditional sound? Instead there’s a round smoothness to the tone across the pedal’s range, but even so, the treble peaks way up in the stratosphere. The top quarter of the pedal’s sweep is especially good for pulling pinch harmonics out of guitars that usually put up a bit of a fight against such techniques, and it even made my Ibanez’s neck pickup squeal with Dimebag-style harmonics.
Vai’s original Bad Horsie mode is the best way to get a ready-to-go sound out of this bad boy, but fiddling around with the Contour and Level controls in the Contour mode reveals fresh layers of flexibility. With the Contour control down low, the sweep reminds me of the classic fat Jimi Hendrix wah tone, with darker treble and reduced range compared to the wild sweep of Bad Horsie mode, and yet a hi fi sheen that seems to take that classic funky “wow-wow” wah sound of the 60s, grab it by its scruffy neck and drag it into the future.

By way of reference, the original Bad Horsie mode seems to be replicatable by setting the Contour control to 10 and Level to 0. Cranking up the level while on this setting thickens the tone considerably, which you can use either as a gain boost or just to compensate for thinner sounding pickups.

If you’re familiar with the wah tones of Zakk Wylde and Nuno Bettencourt when they used Morley wah pedals in their golden years, or if of course you’ve listened to Vai in the last decade or so, you have a rough idea of the charm of Morley wah wah pedals. The sweep is bold and drastic, and the tones have a glassy sheen which leaves no doubt as to whether the effect is on or not, even under huge amounts of distortion. Vai’s own spin on this classic effect is as extroverted and extravagant as the man himself, and whether you want to put a bit more Vai in your sound, or you just want a flexible and in-your-face wah pedal, it’s worth saddling up this Bad Horsie for a test.
CLICK HERE to buy the Morley Steve Vai Bad Horsie 2 Contour Wah Pedal from Guitar Center for $139.99.