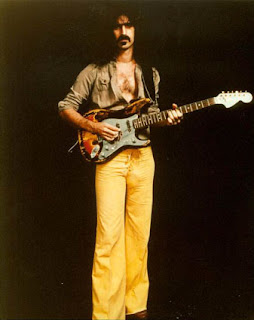 Dweezil Zappa is currently zooming around the world for another Zappa Plays Zappa tour, in which he pays tribute to his dad’s enduring legacy through the startlingly accurate reproduction of his works, as well as painstaking recreations of Frank’s greatest guitar tones. It’s pretty much impossible exactly copy Frank’s legendary tone without investing in thousands upon thousands of guitar and studio gear, and also hiring a tech like the revered Thomas Nordegg to look after it for you. So that’s what Dweezil has done, even bringing out several pieces of gear actually owned and used by Frank. (Here are the complete Zappa Plays Zappa tour dates, including the Progressive Nation tour with Dream Theater).

One of my favourite tricks for getting a Zappa-esque guitar sound is to construct a virtual amp and effects rig in a software modeller. There are plenty out there, so whichever one you prefer, try this combination simultaneously on different tracks, panned to different locations in the stereo spectrum:

* One track of a completely uneffected clean guitar, equalized to emphasise the high and low ends, so you get that sizzling string noise and a punchy low end. (If you’re into Mothers Of Invention-era Frank, try rolling off the treble and increasing the mids, and maybe throwing on some vintage-style compression to get closer to the sound of an old-school mixing desk and tape saturation.)

* A distorted guitar with a very short delay.

* A distorted guitar with a stationary wah effect or a parametric EQ feeding the amp input. Use the EQ or wah to emphasise certain midrange frequencies for that faux-feedback feel. The exact frequency will depend on other factors such as the amp model and your pickups, so you may need to experiment from guitar to guitar. Frank had complex parametric EQs built into his guitars so he could conjure up feedback and sustain at will.

* A distorted guitar with an envelope filter.

* A distorted guitar with a triggered flanger. A triggered – or dynamic – flanger doesn’t sweep to a set tempo. Instead it begins its sweep upon receiving a signal from the input. In other words, each time you pick a note, the sweep starts again. Listen for this effect on ‘Drowning Witch’ and you’ll see what I mean.

You can hear me doing something similar (minus the triggered flanger because I don’t have one!) on my Myspace, on the ‘Myspace intro’ track. I used IK Multimedia’s Amplitube for this.

By the way, many amp modelling programs feature the ability to use two virtual amp rigs at once, but if that’s just not enough, or if your program only offers one sound at a time, copy and paste the same guitar part onto multiple tracks and process each one differently.

Of course, if you want to get somewhere close to Frank’s sound using an actual amp on a real live stage, you might need to take a different approach, unless of course you want to lug half a dozen amps with you. Splitting at least between a completely clean tone and an effected one is usually preferred, but if you can’t do that then the most important elements are the trigger flanger and a wah wah so you can find those resonant frequencies easily.