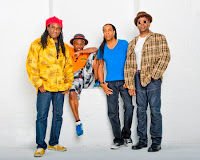 Here’s a little personal background, because this is my blog, dammit, and I’m allowed to waffle on a bit from time to time.

I’ve been a Living Colour fan ever since about 1990 or so when I saw the video for Type on an Australian show called Countdown Revolution. I’ve played ‘Love Rears Its Ugly Head’ countless times in various cover bands and bar jams. I’ve shredded my fingers to the bone on licks from ‘Ignorance Is Bliss’ and banged my head to ‘This Little Pig.’ I think I listened to Collide-O-Scope for about a month solid. Finally saw them live in 2006 and while I didn’t get to meet them, Vernon gave a few guitar picks to my buddy Steve from Tempus and he gave one to me, so it has pride of place with my Steve Vai and Brian Molko picks. And Vernon Reid is one of the nicest guys on Twitter. Follow him here.

So it should come as no surprise that I’m a little dizzy with excitement about the forthcoming new Living Colour album.

New York/London — Living Colour will release their first new studio album in five years entitled The Chair In The Doorway on September 15 via Megaforce Records. The legendary downtown NYC rock band, who exploded out of CBGB’s in the late ’80s, landing all over MTV, the cover of Rolling Stone and stadium stages around the world with their Grammy Award-winning, multi-platinum debut album Vivid, are back and “fierce” as ever.

Original members Vernon Reid, Corey Glover, Will Calhoun and (since 1993) Doug Wimbish gathered at Sono Studios outside of Prague in The Czech Republic during the fall of 2008 and spring of 2009 to write and record what would become The Chair In The Doorway. The results stretch from the modern soul anthem “Behind The Sun” to the politically-charged, heavy rock of “DecaDance” to the sacred steel blues of “Bless Those.” The artwork for The Chair In The Doorway was compiled from thousands of contest entries by fans from around the world.

“We feel like this is the best record we’ve made yet and we couldn’t be more excited to be releasing it with the legendary Megaforce Records,” says guitarist Vernon Reid. “Some of our favorite bands were or are Megaforce artists, Metallica, Bad Brains, Anthrax, Black Crowes, so it’s an honor to be part of a label with a great legacy.”

Living Colour will announce plans for a world tour shortly. With dates set to begin in September, it will include their first North American tour in four years along with performances in South America, Europe, Australia and Asia.

Having helped to pave the way for a number of contemporary African-American artists to follow in their wake, ranging from Rage Against The Machine to Lenny Kravitz to Ben Harper, with a multi-dimensional sound that drew equally from Jimi Hendrix, Bad Brains, Talking Heads and Ornette Coleman, the success of Living Colour broke down the color barriers in rock music. Guitarist and founding member Vernon Reid also founded the Black Rock Coalition to use his influence to further this cause.

Discovered by Mick Jagger who produced their first demo and later offered them an opening slot with The Rolling Stones, Living Colour would go on to create a repertoire that includes a multitude of classic songs, including “Cult Of Personality,” “Elvis Is Dead,” “Open Letter To A Landlord,” “Glamour Boys” and “Love Rears Its Ugly Head.” With The Chair In The Doorway, the fifth album of their storied career, Living Colour expands the scope of their timeless body of work and, in the process, proves vital as ever.