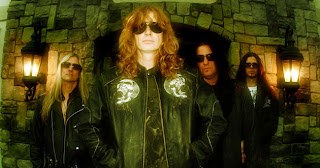 Aaah, nothing like a big ‘ol Megadeth press release to get one’s morning started. I am, of course, an overbearingly enthusiastic Megadeth fan so forgive me for squealing like a schoolgirl.

Heavy metal institution Megadeth have announced ENDGAME as the title of their twelfth studio album. The album is expected to be released in September through Roadrunner Records. It was recorded at the band’s brand new, self-built studio, Vic’s Garage, located near San Diego and named after the legendary and iconic Vic Rattlehead character.

ENDGAME is being produced by Andy Sneap and Dave Mustaine. Sneap also manned the boards for 2007’s United Abominations. Some track titles include “Headcrusher,” “1,320,’” “How the Story Ends” and “This Day We Fight!”

ENDGAME boasts the technicality, ferocity and snarl that’s synonymous with Megadeth and Mustaine. It’s a violent masterwork that represents Mustaine’s best work in nearly two decades. In a musical world dominated by bands that make generic, blanket statements, ENDGAME finds Mustaine, once again, making informed and substantial lyrical declarations about the state of the world we live in.

Mustaine himself commented on ENDGAME, saying, “Thematically, I’ve never been known to be a silent bystander in a world that needs our participation. As more is revealed about our former President’s legacy, a little-known yet staggeringly frightening document which was signed into law, named ‘ENDGAME,’ has been uncovered. The album ‘ENDGAME’ is the most energetic music offering I have penned in over a decade and is far more believable than knowing someone signed ‘ENDGAME’ -the document- into law. The album is also the perfect ‘ass- kicking’ music to listen to once you are done reading the aforementioned document!”

In short, it’s the Megadeth record that fans of classics like So Far…So Good…So What? and Rust in Peace have been chomping at the bit for.

“This new album is my proudest moment since the famous (or infamous) Rust in Peace album,” Mustaine also said. “With this album, I am also very excited to be introducing my new lead guitarist Chris Broderick to the world. I have always felt lucky to have had top shredders in that position, but after touring with Chris in support of my last album, I couldn’t wait to get into the studio and see what he could do.”

Earlier this year, Mustaine was the recipient of the “Golden God Award” at the first ever Golden Gods Awards, presented by Revolver.

Wanna hear a taste of Endgame? CLICK HERE to check out Andy Sneap talking about the mixing process and giving a little teaser of the track ‘Headcrusher.’