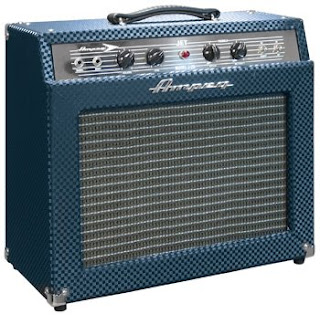 I like MIDI-controlled channel-switching, tone-sculpting mega amps as much as the next dude (sometimes more, I think), but sometimes there’s nothing finer than plugging into a very simple valve amp and letting rip. Ampeg comes to the rescue with the J-20, a 1960s-themed 20-watt, Class AB, all-valve, point-to-point wired 1X12” combo in its Diamond Blue Lead Series.

The J-20’s preamp has three 12AX7 tubes, while the power stage is built off dual 6V6s in fixed-bias mode. Rectification is via a 5AR4 valve, and the amp’s lone effect, a tremolo, operates via bias variation. Look in the back and you can actually see the valves shimmering in time to the tremolo rate. Very cool. The tremolo is controlled by a footswitch, and has controls for rate and depth. The only other controls the amp has are volume and tone, while Normal and Bright inputs also allow you a bit of tone-sculpting control without loading the amp up with switches, dials and other such voodoo. Simple and straightforward. There are twin output jacks for hooking the J-20 up to external speaker cabinets if the included 12 inch Alnico-loaded unit isn’t enough, but the J-20 is quite loud due to its Class AB operation, so you might want to hold off on hooking up a couple of quaddies until you’re playing Madison Square Garden.

At lower volumes at J-20 has a very up-front compressed tone. You could almost be forgiven for thinking there’s a compressor built in, or that you’ve got your favourite compressor pedal in-line. This gives the amp the feel and responsiveness of being cranked up even at bedroom levels, by approximating the sonic effects of a pushed power amp. At lower volumes the tone control almost functions as a gain control, with the volume and body noticeably increasing at the same time as the treble level. Turn up the volume and eventually the sound starts to break up and become crunchy and overdriven, but remember we’re talking about a vintage-style amp here: you’re not going to get insane rivers of molten distortion flowing forth from the speakers. You’ll get some jangle and clang with good sustain and nice overtones though.

The tremolo circuit is a little bit noisy when you’re playing by yourself, but you won’t hear that background noise in a recording or concert situation, so it doesn’t even really rate as a ‘negative.’ The effect adds anything from a nice shimmer to a simmery undulation to an all-out violent strobey freak-out. I found the former to be my preferred setting, especially for Clientele-style jangly chords from my Ibanez Talman (by the way, that guitar has a Bigsby whammy bar, and there’s something primal and cool about going all Duane Eddy on the low E string with a Bigsby and an amp tremolo effect. You gotta try it).

The J-20 is very responsive to whatever you put into it, be it single coils, humbuckers, P90s, etc. It’s simple and elegant, and it while it doesn’t get in the way of your playing it also makes sure you are presented in your best light. It would be great if a spring reverb was included to soften the edges a little bit in some situations, but as it stands it’s a very usable amp for those who like to get old school with their tone.