Time for the latest in this regular series. If you want to play catch-up, check out the first 3 entries: 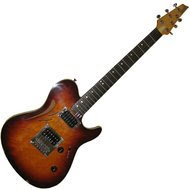 If you read I Heart Guitar regularly you’re probably aware of the epic battle that takes place in my mind between my love of Ibanez shred axes and my lust for Telecasters and the like. This monumental struggle is akin to the earth-rattling clashes of Othello and Iago. Daltry and Townshend. Megatron and Starscream. I’m not sure if it’ll ever be resolved but I know this much: the Ibanez-owned Starfield brand comes as close as anything ever has to pacifying both warring factions of my internal monologue. Ok, so there are two main Starfield models: the Altair and the Cabriolet. The Altair is similar in many ways to my beloved Ibanez Talman model, while the Cabriolet mixes Telecaster and Les Paul vibes with some stylish bevelling. For a while Richie Kotzen was rocking the Starfields before finally jumping from the Good Ship Ibanez to take up with Fender. David Williams used Starfields on Michael Jackson’s Dangerous world tour, and Live used them around the early Throwing Copper era. The Starfield brand was originally used for Gibson-inspired designs in the 70s. While it was revived in the early 90s it only lasted a couple of years – from about 92 to 94. I guess the closest you’re going to get to a Starfield Cabriolet these days is the
Ibanez FR series. 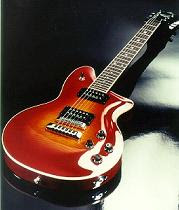 These neat little axes were heavily associated with Nuno Bettencourt around the time of his Schizophonic solo album. Derek Trucks was another high-profile user for a while there. While these aren’t Nuno signature axes in the same way as his N2, N3, N4, N5 and N6 models he did have a degree of design input to the P series, and their streamlined Les Paul-ish vibe suited some of the material on Schizophonic perfectly. Structurally they have a lot in common with Les Pauls – mahogany body, maple top, 22 frets, stop tail piece and Tune O Matic bridge (and a Bigsby option, woohoo!) but with more noodle-friendly access to the upper frets and an expanded tonal palette courtesy of coil-splitting. There were various versions of this guitar including the quite deluxe P4, the more reserved P2 and the lower-priced C-II. 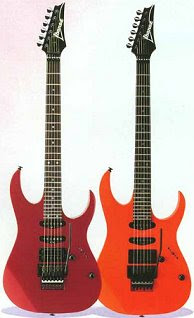 There’s something undeniably fun about 80s-style superstrat axes. Whammy bars, fast necks, humbuckers, big fat frets that make it hard to mess up a note once you’re holding it down… Most of my guitars are in this style but every now and then I find myself missing the sound of a single coil pickup in the neck position. I guess 20 years ago Ibanez somehow knew I would be feeling this way some day, and their Jedi-like foresight led them to design the RG560. Very similar to the RG570, the 560 differed in its use of a single coil at the neck position, but in terms of popular acceptance they may as well have replaced the neck with a trumpet and put a rabid bat where the whammy bar should go. For Ibanez this pickup layout just didn’t catch on like the twin-humbucker and humbucker-single-humbucker arrays of other RG and S series models, and eventually the RG560 just kinda faded away. That’s a shame but it’s also kinda awesome at the same time because you can find these for pretty reasonable prices on the used market now. I saw one at a secondhand guitar store recently for an obscenely low price and I’m kicking myself that I didn’t pick it up. One particular fan of the RG560 is Lewis from the Japan Guitar Journies blog. Hi Lewis.

This Japanese-made oddity is one of the more adventurous and futuristic of Fender’s latter-day designs. Unusual-for-Fender features include a 24-fret neck, floating System I tremolo, unusually-shaped pickups, and relatively complex electronics including a coil tap switch and a stacked tone controls. These were produced by Fender’s Japanese factory for only one year, 1985, before they were ditched from the catalogue. They’re quite hard to find today, and once you get one you tend to hang on to it. I guess the radical shape could be considered somewhat controversial, but I love it. I like how the body angles are echoed by the angle of the pickup; how the pointy headstock kind of finishes off the visual flow established by the cutaways; and the ‘not-quite-neck, not-quite-middle’ placement of the second pickup. I have a feeling that if Fender were to retool this design – maybe put a ‘real’ Floyd Rose on it and shift that second pickup forward to a more conventional neck placement, this guitar might fare a lot better today than it did back at the time of its original run.