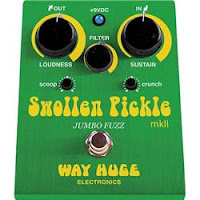 It’s one of the most revered fuzz pedals of the modern age but there’s nothing about the name ‘Way Huge Swollen Pickle’ (except maybe the word ‘way’) that doesn’t make me feel a little dirty. I swear, if I had one of these pedals back when I was a teenager, I probably would have put duct tape over the words because I was easily embarrassed back them. Today I just think it’s hilarious and I would proudly wear a shirt with ‘Way Huge Swollen Pickle – Step On One Today’ emblazoned across it.
Oh wait. Way. As in ‘going all the way.’ Hehe. That’s rude! 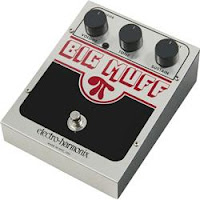 I can clearly remember the first time I read about the existence of this pedal. I was reading a guitar magazine in the lounge room when I was about 13 and I came across the words ‘Big Muff’ and I’m pretty sure I was so embarrassed that I covered the word with my coffee cup (yeah, I was jacked up on caffeine even when I was 13. No wonder I play guitar so freaking fast sometimes). Not only is this pedal a ‘muff,’ it’s a ‘big muff.’ And if that’s not risqué enough for ya, there’s also the Double Muff. I’ve heard of people being born with an extra finger or toe, but really? Really?

The name of this otherwise respectable Gibson pickup gets a mention here because it reminds me of that cheesy old fake Confucius proverb about the man going to sleep with an itchy bum. Ahem.

C’mon, that’s just uncalled for. Even though the BC Rich Bich was unquestionably cool in the hands of Dave Mustaine back in his Metallica days, and had the stamp of approval of metal diva Lita Ford, I’m still kinda surprised that this model name has survived. There’s even a model (pictured) called the Double Neck Bich. I guess it’s designed to be plugged into the Electro-Harmonix Double Muff (and maybe into a Fender Twin to keep the whole ‘double’ thing going, though that’s not particularly naughty unless you’re all like, “Ooh, Swedish twins” or something).
Metasonix $&#^ing $&#^er

Ok, this one isn’t work safe, so I’ve blurred it out for you, and there’s nothing subtle or sly about the name. It’s right there for everyone to see in black and white. Or black and yellow, as it were. Metasonix has a history of being as anarchic and offensive in their marketing as their gear is in its sound, but as Trent Reznor will attest (If you have a keen eye you might spot a Metasonix Butt Probe pedal on the floor in the video for Nine Inch Nails’ ‘The Hand That Feeds’), those sounds can be pretty bitchen in the right context.
Flangers in general
No matter way you pronounce it (‘flang-er,’ ‘flange-er’), it has the same vague aura of naughtiness around it as words like ‘muckluck.’