Tomorrow I’ll be running a guest post from Joe Matera. You’ve no doubt seen Joe’s work in magazines including Guitar World, Guitar & Bass, Ultimate Guitar, Australian Guitar and Mixdown. Joe’s also in the band Geisha, who have recently returned to the live circuit.

Check out this page for a recap of recent Geisha gigs, including pics, fan feedback and a few fan-filmed live videos from our Melbourne shows the other week.

For two evenings, the eighties returned to two Melbourne venues in the form of a re-vamped Geisha outfit playing a smattering of their classic hits mixed in with some rarer gems from their back catalogue, and also including their recently-released single “Birthday”.

On Friday 10th July 2009, the band played at Spensers Live and followed this up with a second gig played at the Toff In Town on 16 July 2009. At both venues, an appreciative audience was able to re-live the classic Geisha tunes or, in the case of those who were too young in the eighties to have known of the band, discover a piece of Aussie rock/pop history. Geisha delivered two sets of songs with frontman Chris Doheny offering the crowd some insights and stories relating to the band and songs’ histories. The crowd were also treated to an encore comprising of an intimate acoustic set of songs, which included the highlight “Kabuki”.

Check out the Geisha page for the video for Birthday. 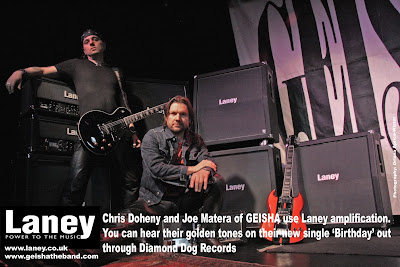