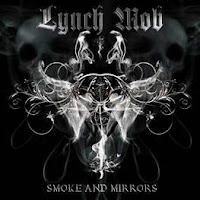 Just got a whole bunch of info about the new Lynch Mob album, Smoke And Mirrors. Can’t wait for this one. Towards the end of the press release below, you’ll find 3 song clips. The samples sound very stripped down and rockworthy, and George Lynch’s guitar tone is nice and crunchy and, in true Lynch style, less distorted on second inspection that it may initially sound. Awesome.

Read my interview with George from last year here.

Frontiers Records is excited to announce the worldwide release of the LYNCH MOB come back studio album entitled “Smoke And Mirrors” to be released on September 18th in Europe and October 13th in the USA.

After seventeen long years singer Oni Logan and guitar wizard George Lynch found their way back together and again show their amazing abilities in some killer new Hard Rock songs.” I would say this new record “Smoke and Mirrors”, is the record we should have put out as a follow up to “Wicked Sensation”…better late then never I guess…”, says Lynch presenting the new record.

Lynch Mob were formed by George Lynch, one of the few genuine guitar heroes of substance to emerge from the Los Angeles scene, after DOKKEN split up in 1989. The band’s first album” Wicked Sensation” went on to sell over 500,000 units in the US and featured the talents of singer Oni Logan, Anthony Esposito on bass and another former DOKKEN member Mick Brown on drums. After a tour in support of Queensryche, Logan opted out, with Robert Mason taking his place on the follow up self titled release. However Lynch and Brown eventually returned to Dokken releasing 2 studio albums until he left again in late 1997 putting together a several new incarnations of Lynch Mob and exploring new sounds with different projects.

However Oni Logan and George Lynch would found themselves again in a studio in the summer of 07. “We weren’t sure what was going to happen” recalls George, “but as soon as I heard what Oni was coming up with just off the top of his head, I knew the old chemistry was still there. So we spent many months writing. The first batch of songs had almost a Southern Rock feel to them and there was quite a bit of acoustic and slide work on those. They also had a genuine 70’s vibe. These first songs had elements reminiscent of Fleetwood Mac, Zeppelin, Black Crowes, Stones and it was all very bluesy. We lived with those songs for a while then went in and did a second round of collaboration. We had tightened up as a band after touring over the summer and we consciously wrote the newer material with the “Wicked Sensation” record in mind. So we updated the earlier songs a little and wrote a few more “adventurous” track and went in to start recording”.

Joining the new line-up are bassist Marco Mendoza (Whitesnake, Thin Lizzy) and drummer Scott Coogan (Brides of Destruction, Ace Frehley). More than a band, this team is guaranteed to create one of the most explosive shows you can ever experience and shines big time on the brand new recording which is set to bring back Lynch Mob on the map of the most exciting Hard Rock bands around! “Marco Mendoza is literally a gift from Heaven” continues Lynch. “How they figured out how to stuff all that talent and goodness into one person I’ll never know. they must have made a mistake at the factory! lol… then there’s Scott Coogan on drums…. baby of the band.. he’s very solid, very “Bonhamesque”. not sure if that’s a real word!”

“Smoke and Mirrors” tracklisting includes:
21st Century Man, Smoke and Mirrors, Lucky Man, My Kind Of Healer, Time Keepers, Revolution Hero, Let The Music Be Your Master, The Fascist, Where Do You Sleep at Night?, Madly Backwards, We Will Remain, Before I Close My Eyes, Mansions In The Sky (Bonus Track).

Lynch Mob are ready to embark on a World Tour in the fall 2009 to follow up on the successful performance at the ROCKLAHOMA 2008 and to promote “Smoke and Mirrors”. “We have been expecting to go out in a support situation with a bigger act in the fall of 09 to coincide with the release of “Smoke and Mirrors” and were also expecting to visit Europe as well. It’s been way too long since I’ve played Europe and we need to tour there extensively… last time Lynch Mob toured Europe was with Queensryche… and I think that was 1991!” concludes George Lynch.

Get back to real Rock with Lynch Mob new album “Smoke and Mirrors” !