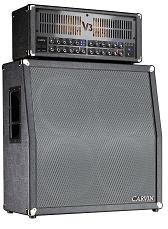 If you’ve scrolled through the menu of a digital modelling amp or processor lately, you would see the same amps namechecked again and again – Classic American and British combos, hot-rodded firebreathing stacks, modern high gain metal heads. There’s a reason these sounds are so heralded, and it’s a testament to their uniqueness that no modeller has quite got it exactly right yet. The Carvin V3 doesn’t try to be any other amp. It’s got its own thing happening, and in doing so it’s able to touch more tonal bases than most other stand-alone valve amps, and with a lot more authenticity than most modellers out there.

The V3 is a 100 percent valve amp, available in head or combo format. I tested the head version, along with the 412VT 4X12 cabinet loaded with four G12T-75 speakers. The front panel features a clean channel, two completely identical overdrive channels and a comprehensive master section. Starting with the master section: the master volume controls the overall output of all three channels. A foot switchable volume boost allows up to an additional 9dB of volume jump for those moments when you need a little extra Awesome Rock Power. Bright, Mid Cut and Deep controls allow you to fine tune the amp’s overall tonality to suit the room you’re playing in – invaluable if you’re happy with your general sound but aren’t getting quite enough bass response on a particular stage, or need more treble to cut through the mix.

The clean channel has a switch to select from three drive modes. The center position on the switch is a classic rich open clean sound with maximum headroom, which can be dirtied up to taste. The Bright setting adds high end chime and sparkle, and increases sustain as the Drive control is turned up. The Soak setting boosts all preamp frequencies, thickening and fattening up the tone.

The identical overdrive channels also feature three drive modes – Centre is the base sound, Thick increases the low end and thickens up the midrange, and Intense scoops the mids and gooses the high and low end for searing metal tones. Additional flexibility is afforded by the EQX switch, which toggles between the standard EQ curve and an expanded bass and treble range. The presence control boosts 8kHz to further increase high end.

One of the most ingenious features of the V3 is its Smart Loop facility, which governs the delegation of two completely separate effects loops. Essentially, you can assign either loop to any channel and have the amp remember the setting, even when you turn it off. For instance, you could have a delay unit assigned to the clean channel, light reverb on one of the overdrives, and both effects assigned to the other overdrive. The possibilities are limited only by your imagination, and when you consider the ability to kick in the master volume boost, the V3 really shows itself to be precision-engineered for live performance.

I tested the V3 with my trusty old ‘87 Ibanez RG550 with a Seymour Duncan Parallel Axis Trembucker in the bridge and a Dimarzio PAF Pro in the neck, as well as a Carvin C66 and DC127. Being a bit of a shred fiend at heart, I started by cranking everything to 10 to see just how much gain was on tap. I was immediately struck not only by how much gain there was, but by how much usable gain the amp provided. Some amps mush out when the gain is pushed up, but the V3 retained clear note definition even on some pretty complex chord voicings. Speed-picked runs had very clear articulation, and with the gain backed off a little bit some pretty nifty Satriani-esque tones were in evidence.

Bringing all the controls back to half, the V3 revealed itself to have some the vibe of a Marshall Plexi pushed just a little bit too far, and yet the tone had more harmonic complexity and midrange chunk thank some Plexis I’ve played – closer to a modded Plexi kind of sound. Switching to single coils, the amp’s impressive headroom and dynamic range became apparent. Carvin could easily release an amp which only featured this overdrive channel, and with a little clever use of the guitar volume knob and pickup selection you could get all the sounds you need from clean to crunch to lead. But the benefits of the pair of cloned overdrive channels are many – you can set identical tones, but increase the gain and mids and add delay on one for your lead sound. Or you can set drastically different rhythm and lead tones, making full use of the EQX and voicing switches.

But the clean channel is by no means to be forgotten. It can deliver a rounded, thick blues humbucker tone, or a hi fi, almost acoustic-like single coil clean sound. It forms a great basis for adding further colour with effects, and the clear note separation is especially effective for soulful, edge-of-overdrive blues or sparkly indie jangle.

It’s hard to fault the V3. The control layout is clever and intuitive despite hosting a huge array of knobs and switches. The Smart Loop, master volume boost and MIDI channel switching abilities arm the amp with all you need to take it to the stage. And the sturdy construction and edgy looks aren’t to be scoffed at either. If I had to find something to criticise, it would be the lack of onboard reverb, but chances are, if you are in the market for a professional, kitted-out amp like this, you would want the extra control of using a rack mounted or digital pedal reverb in conjunction with the Smart Loop feature.

To be perfectly honest with ya, after reviewing this amp I came thiiiiiiiiiiis close to buying it. The V3 touches on the vibe of particular classic (and modern classic) sounds while still having its own personality. It’s a great option for those who want to add something a little unique to their tonal palette while still remaining within the general standards of what we think of as killer rock guitar tone.