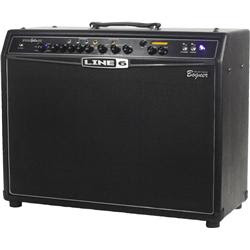 Line 6 has been at the forefront of a lot of sound modeling innovations – desktop units, modeling amps, and the revolutionary Variax guitar. But despite the company’s amp modeling technology finding its way into pro studios worldwide and on thousands of concert stages, purists have been somewhat wary of the lack of valve technology. With the Spider Valve, Line 6 is looking to capture that slice of the market which has been hesitant to try modeling technologies because of the lack of valves.

Line6 turned to amp guru Reinhold Bogner, the man whose namesake company is responsible for the revolutionary Ecstasy, Shiva and Uberschall amps. Bogner Amplification started after Reinhold was brought in to rebuild Eddie Van Halen’s famous 1968 Marshall Super Lead in 1992, so you know he knows his valves.

At first glance, the Spider Valve looks a lot like a Spider III. It shares a similar control layout and 12 amp model types including clean jazz; 1973 Hiwatt custom 100; various Fender valve combos, Marshall heads; a Vox AC-30, Mesa/Boogie Dual Rectifier; and Line6’s own creation, “Insane.” There are also 7 effect types, and you can store 36 of your own sounds in addition to the hundreds of factory presets.

The signal travels into an analog-to-digital converter, then into the digital signal processor for tone generation, and is then converted back to analog and split to a cabinet simulated direct out, and to the effect loop. Then the signal hits a pair of 12AX7 preamp valves. The first acts as a cascading gain stage, and feeds the master volume which hits the next 12AX7 configured as a phase splitter. This is followed by Sovtek 5881WXT/6L6. There are two 6L6 output valves’s for 40 watts of class AB power in the combos, while the head version has four 6L6’s for 100 watts of class AB power. Bogner specified the use of boutique components such as Sprague Orange Drop and Wima capacitors in the tube section, and the combos are outfitted with Celestion Vintage 30 speakers.

The Spider Valve sounds very much like the Spider III at lower volumes. The same artist and song presets are there, and user-conjured tones are similar too. The amp has been re-voiced to provide more complexity to the mid gain tones, and the best way to hear this in all its glory is to crank the amp. Once the valves start cooking (and the neighbours start knocking), the slightly clinical bass response of lower volumes tightens up. The subtle fizz to the treble, common most high gain amps at low volumes, fades away to be replaced with rich transients. But the real beauty is in how the midrange opens up with lush harmonics, and the amp responds more interactively to changes in pick attack, playing dynamics and guitar control settings. This makes medium gain models come alive, and puts muscle and presence into clean tones. The sound tends to still be a little ‘hi fi’ compared to a 100% valve amp, but it’s a much more organic-sounding unit compared to the Spider III.

But don’t just take my word for it – here’s a video of Guitar World’s Paul Riario demonstrating the Spider Valve (although the treble sounds a bit harsh on this video). Make sure you stick around for the blues sound at 9:40 in the video to get an idea of how the Spider Valve handles non-metal styles.

The Spider Valve is more than ‘just’ a modeling amp. It has its own character, and offers something that nothing else in the industry can do. The design input and endorsement of Bogner also doesn’t hurt in lending some cred in boutique circles.