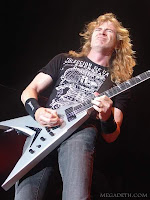 First off, I’m going to try to do more regular blog-type posts in addition to the news, review and interview stuff. So here’s the first.

I just interviewed Dave Mustaine! Dave’s been a huge hero of mine ever since I was 12 or 13 years old and first heard Rust In Peace. I always dug the level of detail and precision in his rhythm guitar playing, as well as the fire and outright angriness of his lead stuff. And I also liked that he was unrepentently intelligent and also a bit grouchy at times. As a rather bookish lad and a budding metalhead at the same time, I liked having a hero who embodied both extremes.

So today finally, at age 31 and after seeing Megadeth live 5 times so far, I finally got to interview Dave! There were a few hiccups regarding a wrong phone number and stuff but eventually it got sorted and the interview happened a few hours after the scheduled time. The interview will be in the next issue of Mixdown and will also be here in extended form soon. Originally I thought I’d publish it tonight but I might sit on it til Tuesday cos I’m publishing my Bumblefoot interview this week.

I’ve done a lot of interviews over the years with some of my heroes – Joe Satriani, Zakk Wylde, Devin Townsend, Steve Lukather – and I’m not usually that fazed but I was kinda nervous talking to Dave – fanboy geek alert. But the dude is such a slick interviewee after many many years of doing it, that it seemed to go really well and he overlooked my geekdom. I think he got a bit bored when I asked one too many questions about Chris Broderick (sorry Dave!) but everything quickly got back on track when we both nerded out over Marshall and Dean.

It was a great chat and I can’t wait for everyone to read it.