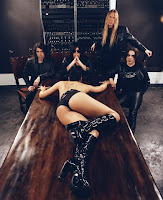 Monster Magnet have been absent from the live scene for quite a while. After a highly publicised battle with prescription drugs, main magnet Dave Wyndorf took some time out from the live circuit to get himself together again. Now Wyndorf and Monster Magnet are back to reclaim the throne they so rightly hold (and to lay mighty blows down upon the usurpers who have pilfered the band’s sound for their own ends in recent years). In fact, in researching this interview and delving into some Monster Magnet stuff I haven’t listened to in a few years, it really struck me that there should be a Grammy category called Band You Didn’t Realise Beat Everyone To It By 15 Years.

It’s been a long time since you’ve toured Australia, and a while since you’ve put out an album. What prompted the forthcoming Oz tour?

It’s been 10 years. What prompted it was me trying to make up for lost time. I lost us some time in the last 10 years. We usually tour for two years off a record but for Monolithic Baby we only did one, so we didn’t make it down to Australia again, for reasons that were totally my fault. I got horribly addicted to this terrible drug called Benzodiazepine, which I took for sleep. It’s pretty embarrassing that after years of being very good with drugs and stuff, I get addicted to a prescription drug. Unbelievable. But long story short, it put me down. Like, really put me down – life threatening and the whole bit.

So was it the pressure of touring and the lack of sleep?

Sleep. Totally. I mean, there’s nothing pressured about touring, except for the fact that you never get enough sleep. At least, I didn’t. And I never realised just how wacky you go when you don’t get sleep. You really go crazy. It wasn’t as easy as ‘I need to sleep so let me lay down.’ I would lay down and not go to sleep. So as a result I would just get up and continue on with my life. And it drove me nuts. So then I got the pills and everything was cool until it wasn’t cool any more. There are certain things in life, natural functions that if you rely upon an artificial remedy, you’re gonna pay for it. And I did. And now that that’s under control I’m like, ‘Let’s go!’ I had to be careful about what I promised I was going to do until I got my feet wet again, so that’s what I did.

So what are your memories of previous visits to Australia?

It’s awesome to be there man. I love Australia. It’s one of my favourite places in the world. I remember so many great things. Obviously touring is not a sightseeing exercise – what you see is dressing rooms and hotels and stuff like that. But I had the greatest time with people I met, and I did get to walk through Melbourne, Brisbane, Perth, Sydney, and I got out as much as I could. I just liked the whole vibe. It’s like someone dropped England into the tropics. To me, a guy from New Jersey, Australia’s a very exotic place. It just seems that the idea of rock is very much alive in Australia. And looking back over Australian music, there’s a lot of guitar. Even pop music. Crowded House? Guitar-based. INXS? Guitar based. Y’know what I mean? It’s fucken’ awesome. I buy psychedelic compilations, and there’s so much psyche rock from Australia from the 60s and early 70s. It’s awesome. So I’m totally sold, from the Scientists all the way up to Wolfmother. I love it.

Talk us through your songwriting process. I worry about asking this question because it can seem so generic but everyone has a different answer.

No man, I love listening to answers and I love to hear how people write songs. I write ‘em with a drum machine or some sort of drum pattern. If it’s a really hard rock song with a 70s feel, a hard rock combo feel, I won’t go crazy on the drum machine. I’ll just use the thing for a tempo. Then the ideas I have about drums are all in my head anyway, so I don’t need to program the drum machine that hard. What I’ll use it for is sometimes accents and tempo, and that’s mainly so I can play it for the band so they’ll get an idea of where I’m coming from, rather than have me start totally from scratch and explain it. They enjoy it that way. Now, if it’s something more poppy or like a standard rock and roll song then I’ll program the drums because there’s not a lot of fills in the songs and I can actually program the drums to nail exactly what I wanted. So depending on what type of song it is, more or less of the drum machine, and always something to keep tempo. For recording I have one of those real amateur-hour things, a little Korg D 1600 MK2, and it’s good enough. It’s great. You can put 16 tracks down but on my demos I don’t usually go over 8 or 9 tracks, and it’s fine.

Do you ever bring in a completely orchestrated demo?

I used to, all the time, completely, in the early days. The band would be like, “Why are we even playing it? It’s all done!” But I loosened up in the later years. And I’ve become better at explaining what I want, what I’d like to hear. And also there’s a danger of, when you finish something a little bit too close at home you wind up chasing after that, never getting it, and you wind up disappointed. It’s a bitch. So this is something I’ll do with the small songs: If you’re going in to record with a band and you’ve got like 12 songs to do or something, leave a bit of time in the studio for three of those songs, to do them the way you would do it on a demo, but just do it on the big gear. I think you’d be really happy. It’s a little pressurised because, like, [adopts gruff studio engineer voice] “What, you’re gonna do it all yourself?”] but as long as the sounds are there, how bad could it be? You know what you’re doing, you’re playing against each other. I do this all the time with the smaller songs, the ballads and stuff. They’re played by me alone because it actually saves time and I know they’re going to be somewhat together because I know what I played on the previous track. Listen to White Stripes. I think everybody knows by now that Jack White played the drums on those records. He played the drums, he played the bass, he played everything. And Elephant, Get Behind Me Satan are really fucken’ great records. I’ve gotten to the point of, anything that works.

Let’s talk about gear for a moment. Are you a big gearhead?

I used to be a huge gearhead. Fuzzboxes and stuff. I still love it. I just think there’s nothing like buying something that will enhance – or you believe will enhance – your sound. I learned a long time ago that most fuzz boxes pretty much do the same thing. There’s not that much difference, but when you have that cool-lookin’ box in your hand, it’s fucken’ badass, y’know? I want a Foxx fuzztone as opposed to the Vox. I want the Fender Blender. I want the original Big Muff, I want the Russian Big Muff, I want the Mini Muff. I love it. And I love vintage tape echo machines, although they’re making some really great digital ones now. The digital Echoplex, and Roland has a digital Space Echo, which sounds like it would be ridiculous, but they did it. They actually made it sound really, really awesome.

You need as many options as possible, so you can go through and use every one, or decide that they all sound like shit and just go back to an amp and a guitar, which is something I often do with recording. I’ll just say “I tried every box in the world and none of them is doing it for me, so let’s just plug an SG into an old Marshall.”

So what was your first guitar?

My first guitar was a Washburn. I can’t remember the model of it. It was an ulgy red thing that looked kind of like a horse shoe, just a plain butt-ugly guitar. To me it looked kinda like an SG body, but it really didn’t. It had 2 big humbuckers in it. At the time I thought that was the coolest thing in the world.

I started playing when I was about 28, 29. I was too lazy to play. I was a singer before that. It’s interesting, before I even bought a guitar I bought a fuzz box. I bought a fuzz box, a microphone and a four-track. And the guitar was actually the last thing I got. So I was sitting at home with a four-track machine, screaming through a fuzz box and making guitar parts with my mouth. Because I was desperate to write songs, and I didn’t have people to play with any more because my first band had broken up. But it actually works when you’re writing songs. So I bought that Washburn, and every day I would try to learn chords. I started just recording stuff with one string, or two strings with one played open for psychedelic parts. Eventually I learned a couple of cheats on some chords, and then I was off. That’s why the guitar’s the best instrument in the world.

CLICK HERE to buy the Boss RE-20 Space Echo delay/reverb pedal from Musician’s Friend for $249.

This interview is also in the current edition of Mixdown Magazine.