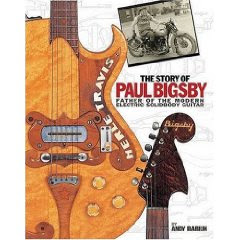 Yesterday Mrs I Heart Guitar gave me this awesome book, The Story Of Paul Bigsby – Father Of The Modern Electric Solidbody Guitar, by Andy Babiuk. It was a birthday present from my Amazon.com wish list, but sometimes one has to wait a while for stuff to make it from Amazon headquarters to Australia.

I only flipped through the book last night so I’m not ready to publish a review of it, but here’s some info from the publisher: