“The album was 20 years in the making,” Ace Frehley says, in reference to the years that have elapsed since Trouble Walkin’ in 1989 and the September 15 worldwide release of Anomaly. “I started tracking in 2007. I tried to make it as close to my first solo as possible because most of my fans cite that as their favourite record, y’know? I did an interview the other day and I ask the guy, who had heard the whole album in its entirety, what he thought of the record, and he said ‘You could call it ‘Son of,’ you know? So hopefully I think I achieved that.”

Ace Frehley, 2009 edition is a more sober man than the Ace of 1989 or even 1999, when Ace was back in the KISS juggernaut supporting the controversial Psycho Circus album. Although that CD was the first original KISS studio recording to feature Ace since Music From The Elder in 1981, Ace’s contributions were, by his own admission and much to his dismay, rather minimal. Today though, with KISS about to release their own album, Sonic Boom, Ace has his eyes fixed firmly on the future. Y’know, just what you would expect from rock’s preeminent guitar-slingin’ spaceman.

One thing I really like about Anomaly is that even though you used Pro Tools, it doesn’t sound like a ‘Pro Tools album.’ It sounds like it could have been recorded 20 years ago, 30 years ago…

Yeah, well I used a lot of old amplifiers, old guitars, old mics. And I’ve worked with some of the greatest producers in rock and roll: Eddie Kramer, Bob Ezrin and a host of others. And I’ve learned a lot of mic’ing techniques and ways to record from them. Plus I threw in a couple of tricks I’ve learned over the years on my own. I think I achieved an analog sound even though 90% of the record was done directly into the computer.

One thing that really struck me was that the drum sounds are really sharp and snappy, which is really cool.

Yeah! I had Marti Frederiksen and Anthony Focx mix the record. Anthony Focx really specialises in drums because he’s a drummer himself. He really tweaked the drum sound. I just think he did a wonderful job with the mixing, tweaking the drum sounds, the digital reverbs, and the actual room sounds that we got.

Being a guitar geek, I couldn’t forgive myself if I didn’t ask about your approach to gear on the album.

I used a bunch of old Marshall amps, old Fender and Vox amps. I used about a dozen acoustic guitars. Les Pauls, about a half a dozen vintage Fenders. I used a (Gibson) Reverse Firebird. I probably used 25 different guitars on the record. I even used a synthesizer guitar on ‘Change The World.’

Cool! Was that a new one, or one of the old ones people seem to be digging into lately?

I’ve been getting into that myself a bit.

This is the first album I’ve done completely digitally, and after working that way I could never go back to working all analog again. The flexibility of digital editing is unbelievable. I did a lot of editing, sampling and cutting and pasting in my hotel room. While Marti and Anthony were mixing one song, I was fine-tuning other songs in my hotel suite, which expedited the album.

Did you use it as a songwriting tool too, or more of just a recording or editing medium?

Nah, I don’t use Pro Tools as a songwriting tool. Most of the songs I write, I just have a drum track in the background. Just the beat, and either an acoustic or electric guitar. That’s the way I write, then I add vocals and build it from that. Some tracks were recorded as a three-piece with Anton Fig and my bass player. Some tracks I recorded into Pro Tools with a drum machine and Anton played drums to them.

Yeah! The first Ace Frehley signature series guitar came out in 1997. That was a Cherry Sunburst. The new one’s going to be a Blueburst with some special features: pickups I designed, speed knobs, lighting bolts… It’s going to be a special guitar. It’ll be released by the end of the year. The new pickups are basically a collaboration between me and Gibson.

One of my readers wanted to know what you use the middle pickup for. Does that come up often or is it just because it looks really cool?

Are there any plans to do an Epiphone version of the new guitar?

Cool! Speaking of guitar, the instrumental track ‘Space Bear’ has a really bright, powerful tone. What are you using on that one?

I’m using a Les Paul and I doubled it with another Les Paul… actually I doubled the rhythm track on that with a Reverse Firebird. That song, I wrote that a couple years back. I wrote it for a television pilot for a police show that was never picked up by the network. I had that laying around and I developed it into ‘Space Bear.’ That song was probably the least amount of overdubs of any song on the record. I kept that pretty sparse except for a guitar solo and the riff overdubs.

The ‘Fox On The Run’ cover – when I first heard you did that I thought it was a weird choice, but once I heard it, and especially the verse, it really made sense.

Well last year when I was trying to finalise the songs for the record, I thought it’d be a good idea to do a cover. We were kicking around a few different ideas, and the gal who does my makeup for photo sessions came up with the idea to do ‘Fox On The Run.’ I ran it by my engineer, my assistant and Marti Frederiksen and everyone thought it was a great idea. When I went out to LA to mix the record we had not recorded that song yet. Me and Marti threw that song together one afternoon directly into Pro Tools. Marti programmed the drums, played bass, sang backgrounds, and I did everything else. Then I took the track back to New York and overdubbed live guitars on it. Then I brought the track back to LA and Marti put Brian Tichy on it, and that’s basically what you’ve got there.

I’ve had so many guitar students wanting to learn your licks. Is that amount of influence something you think about when you’re writing and recording new songs, or do you try and not think about it?

It’s something I don’t really think about very often, but when people bring it to my attention it seems a little in the abstract. Cos I never took a guitar lesson, I don’t know how to read music, and the fact that I influenced so many upcoming musicians – I almost feel like maybe I should have practiced a little more (laughs). But it’s something I don’t really think much about. I kind of try to live in the now and just focus on what’s at hand, you know? 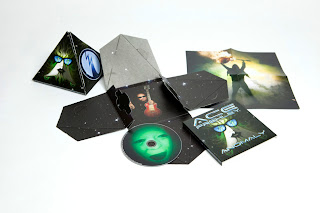 The packaging of the album is really cool and unique.

It’s something I designed on the computer. I took from a lot of different influences. The actual kinda tentacles coming off from the side came from an alien from the movie Invaders From Mars. And obviously the lightning bolts are part of my persona as a spaceman… it’s just something that developed.

Well that’s all the time we have. Thanks so much!

Thanks so much for the interview. I just want to thank all my fans down in Australia for all the support over the years and I’m looking forward to coming down there.

Huge thanks to Riot Entertainment for arranging this interview. Riot are releasing Anomaly here in Australia on September 15.