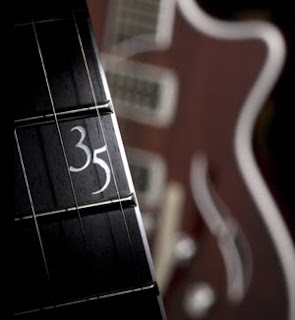 Taylor Guitars Commemorates 35th Anniversary, Announces First of Limited Edition Anniversary Models
EL CAJON, Calif. – August 31, 2009 – This year, Taylor Guitars is set to commemorate its 35th anniversary with its most eclectic collection of limited edition guitars to date. From new models to premium versions of existing guitars featuring exotic grades of wood, the company will be crafting small quantities of each to celebrate. The first series of anniversary guitars to be released highlights the company’s electric line, offering exotic tops in the SolidBody XXXV-SB-K (koa) and the XXXV-SB-QM (quilted maple); and in the semi-hollowbody T3 as the XXXV-T3-C (cocobolo) and XXXV-T3-K (koa).

SolidBody players will lust after the shimmering feathered koa top of the XXXV-SB-K and the buttery golden waves of quilted maple on the XXXV-SB-QM. Both SolidBody anniversary models feature a body crafted from mahogany, a sloping venetian cutaway, and a single fretboard inlay of “35” between the 11th and 12th frets. Complete with an ultra-adjustable bridge, easy-rolling control knobs and a shaded edgeburst, these guitars come ready to rock with Taylor’s Style 1 HD (high-definition) pickups for pure electric power.

The 35th Anniversary edition of the much-raved-about T3 gives players a choice of fiery-orange colored cocobolo (XXXV-T3-C) or rich, sparkling koa (XXXV-T3-K). These limited edition models feature bodies and necks crafted from sapele, ebony peghead overlays, chrome hardware and will feature the “35” anniversary inlay between the 11th and 12th frets. Introduced earlier this year, the T3 features Taylor’s Style 2 HD pickups, three-way pickup switching, and coil-splitting that gives players a spectrum of humbucker and single coil sounds in one guitar. On the T3/B, an authentic Bigsby vibrato tailpiece is paired with a roller bridge for smooth functionality and an added dimension of sound. Both XXXV-T3 anniversary models will be produced in ultra-limited quantities.

The XXXV-SB-K and XXXV-SB-QM along with the XXXV-T3-K and XXXV-T3-C will be offered at a suggested list price of $3798, and the XXXV-T3/B-K and the XXXV-T3/B-C at $3998. All 35th Anniversary models, including those yet to be announced, are expected to be available in North America in early fall and internationally in winter.