Here’s a dilemma I face pretty much every day. You have your guitar set up to perfection. Perfection for you (well, for me) includes a finely balanced Floyd Rose type system. Problem is, every now and then you wanna jam along with some early Van Halen, Extreme, Yngwie Malmsteen, Jimi Hendrix, Slipknot, Meshuggah… can’t really do that unless you change your tuning, and you simply can’t lower the tuning for a few songs on a Floyd Rose, unless you use a device like the Tremolno to block the trem first, but then you can’t do any awesome whammy bar stuff. What’s the point? So you scrimp and save and buy another guitar with the intention of using that for a lower tuning. But you like the sound of it so much that you decide to keep that one in standard too. Time to start saving again… repeat every time you get into another band with a different degree of downtuning. 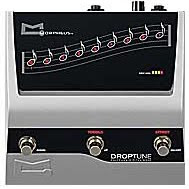 Morpheus has come to the rescue with the DropTune, a pedal designed with one thing in mind: to lower the pitch of your guitar while not sounding so darn fake about it. I’m sure we’ve all tried various pitch-shifting devices one time or another to achieve this. If the weird underwater-sounding digital artefacts don’t kill ya straight away, the latency will. But what do you expect: those pedals are typically designed to shift the pitch downwards to recombine with the original note anyway. The DropTune doesn’t aim to be a harmonizer with pitch-shifting capabilities. It’s just a pitch-dropping pedal.

The DropTune’s design is simple. There are three footswitches: On/Off, Up, and Down. The On/Off switch is also labelled ‘effect’ (see the photos) while the Up switch is also labelled ‘toggle.’ I tested a prototype version that didn’t have these markings. Around the back there’s a guitar in, a line level pot, a line out, a USB port and the 12V DC 500mA power jack.

The DropTune allows you to drop the guitar’s pitch up to 3 ½ steps down in ½ step increments (ie: your low E can be changed to Eb, D, Db, C, B, Bb or A) as well as an octave-down setting and an octaver effect which blends the octave-down note with your original one.

So how does it sound in practice? Awesome. For testing I used an Ibanez RG7620 7-string with DiMarzio Crunch Lab and LiquiFire pickups. I set the DropTune so I could play the low B string with the effect bypassed, then switch it on and play the E string instead but dropped to mimic the low B. Toggling back and forth between the two strings, the main difference was one of punch. The harmonic complexity remained pretty much intact, but the digitally dropped note was a little looser and softer – warmer and not as snappy. Through a raging amp you probably wouldn’t even notice a difference. Slight latency can be detected if you listen really hard – not enough to be distracting and certainly less than I’ve experienced with using software amp sims in Pro Tools, for instance, but it’s more detectable when playing unaccompanied.

One of my favourite features on the DropTune is the Toggle button. Use this to switch the effect on and off rapidly for weird pitch flutters, or even just to mimic a few notes or chords on a phantom 7th string if you’re playing a 6-string. Where was this pedal when I was 16, trying to play Steve Vai’s ‘The Riddle’ on a 6-string and having to play the few 7th-string notes an octave higher on my 6-string?

It’s also very gratifying to be able to play songs in Eb or D without having to set up another guitar. Finally I can jam along to ‘Eruption,’ ‘Far Beyond The Sun’ and ‘Sad But True’ with accuracy and ease! Sweet!

During the time I had the DropTune, a firmware update was released, so I was able to try it out both before and after the update. It was pretty cool to be able to hear the product in development like this. Before the update there was a slight muddiness to the notes and a little bit of noticeable latency. After the update the latency was greatly reduced and the notes sounded a little punchier. Here’s a little recording I whipped up, using Dream Theater’s ‘Lie’ as an example. Here’s what you’ll hear after the count-in:

Then there’s a little solo, still using the Morpheus dropped down 5 semitones.

The post-upgrade E string version sounds eerily close to the B string version. Bar 2 before the upgrade is slightly muddier but Bar 3 has much of the same bite and snap as Bar 1. At the most, the sonic difference can be likened to using a different string gauge. There’s only the tiniest bit of latency but it’s barely even noticeable and certainly not distracting. In fact, the only distracting thing for me is hearing the natural pitch of the strings clashing with the Drop Tune when playing at bedroom volumes!