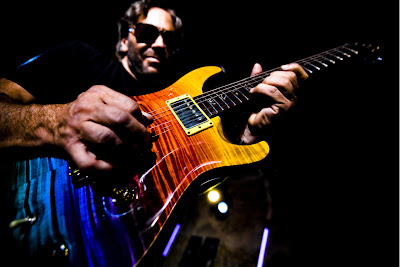 A bona fide guitar hero, perennial poll-winner and virtuoso of the highest order, Al Di Meola has also been recognized over the past 30 years as a prolific composer and respected artist with over 20 recordings as a leader. His creative output to date is staggering, whether it’s with his current World Sinfonia band or past musical endeavors like his electric Tour de Force group with Jan Hammer, Anthony Jackson, Steve Gadd and Mingo Lewis, the internationally acclaimed Trio with fellow guitar superstars John McLaughlin and Paco de Lucia, the Rite of Strings trio with Stanley Clarke and Jean-Luc Ponty or the ‘70s fusion supergroup Return To Forever with Chick Corea, Stanley Clarke and Lenny White. And while his dazzling technique on both acoustic and electric guitars has afforded him regal status among the hordes of fretboard aficionados who regularly flock to his concerts, the depth of Di Meola’s writing along with the soulfulness and his inherent lyricism of his guitaristic expression have won him legions of fans worldwide beyond the six-string set.
A pioneer of blending world music and jazz, going back to early Latin-tinged fusion outings like 1976’s Land of the Midnight Sun, 1977’s Elegant Gypsy and 1978’s Casino, the guitar great continues to reflect the rich influence of flamenco, tango, Middle Eastern, Brazilian and African musics on more recent outings like 1998’s The Infinite Desire, 2000’s The Grand Passion, 2006’s Consequence of Chaos and 2008’s La Melodia, Live in Milano.

Coming off of 2008’s triumphant 25-year reunion tour by Return To Forever, which produced the live two-CD set Returns and the concert DVD Live at Montreux, Di Meola began rehearsing new music with his New World Sinfonia band in preparation for a coast-to-coast tour of the States in the early part of 2009, followed by whirlwind tours of Europe and the Middle East. Di Meola calls his bandmates in the New World Sinfonia –Fausto Beccalossi on accordian, Peo Afonsi on acoustic guitar, Peter Kaszas on percussion, Gumbi Ortiz on percussion, Victor Miranda on bass — “the best group of musicians so far in my career.”

Di Meola’s ongoing fascination with complex rhythmic syncopation combined with provocative lyrical melodies and sophisticated harmony has been at the heart of his music throughout a celebrated career that has earned him critical accolades, three gold albums and more than six million in record sales worldwide. He has been particularly enamored over the past 20 years by the tango music of the late Argentinian composer Astor Piazzolla, whose compositions he has interpreted over time, beginning with 1990’s Di Meola Plays Piazzolla, continuing to 1993’s Heart of the Immigrants, 2002’s Flesh on Flesh and right up to 2007’s Diabolic Inventions and Seduction for Solo Guitar. “Piazzolla had a profound effect on my development as a musician and as a person,” says Al. “We became close friends, often communicating by mail. And during the course of this friendship my admiration and desire to learn more about this great man intensified.”