Lick Library’s unique Learn to Play – The Solos format now includes Zakk Wylde and Randy Rhoads. The design of the Learn to Play The Solos DVDs includes a CD of professionally recorded guitar jam backing tracks at three different speeds, slow, medium and full tempo, performances of the solos at three speeds, plus expert tuition which breaks the solos down into easy to learn sections.

Zakk Wylde is best known for being Ozzy Osbourne’s guitarist, founder of Black Label Society and lead guitarist and vocalist with Pride & Glory. He’s won practically every guitar magazine award there is and has inspired guitarists of all styles. On stage with Ozzy, Zakk is regarded is one of the few guitarists still flying the flag for seriously shredded solos and high energy performances full of passion.

Randy Rhoads featured on Ozzy Osbourne’s first two solo albums which have sold over six million copies combined. Often cited as an influence by many contemporary heavy metal guitarists, Randy Rhoads was one of the few guitarists of his era to create his own signature style by being one of the first heavy metal guitarists to incorporate classical music into his playing. Although he only issued a pair of major-label albums during his lifetime, he immediately reached legendary status upon his tragic death in early 1982

Learn to Play Zakk Wylde, The Solos (RRP £23.99) is taught by professional guitar tutor Andy James, who was once lucky enough to jam with Zakk and Ozzy. The tuition DVD details five solos from classic tracks featured on the No Rest for the Wicked and No More Tears albums. This professionally produced, multi camera shot, guitar lesson breaks each solo down into clearly explained bite sized chunks, and is full of tips and techniques to help you get your playing up to speed. Watch and listen to demonstrations of pinched harmonics, alternate and hybrid picking and that heavy vibrato so indicative of a true Zakk Wylde style of playing. Solos taught on this DVD come from Miracle Man, Devils Daughter, Breaking all the Rules, No More Tears and Mama I’m Coming Home.

Learn to Play Randy Rhoads, The Solos (RRP £23.99) is presented by Danny Dill former pupil of Joe Satriani and writer of many of the songs featured in “The Osbourne’s” TV show. Danny invites you to pick a track and grab a guitar as he takes you through note for note demonstrations of five characteristic Randy Rhoads solos at three different tempos. The DVD format gives you plenty of time to understand what Danny is showing you, and the chapter keys allow you to repeat each section as many times as you need to nail that guitar riff or lick. Solos included come from the tracks Goodbye to Romance, Crazy Train, Over the Mountain, Flying Again and Mr. Crowley, all of which have become metal standards and showcase Randy Rhoads full talent as a guitarist.

The Learn to Play Solos format includes many more famous guitar legends, these and the Zakk Wylde and Randy Rhoads DVDs are available to purchase through www.licklibrary.com along with over 20,000 other guitar tuition products. For the ultimate range of tuition products, www.licklibrary.com has the comprehensive and definitive professional guides to learning to playing the guitar. 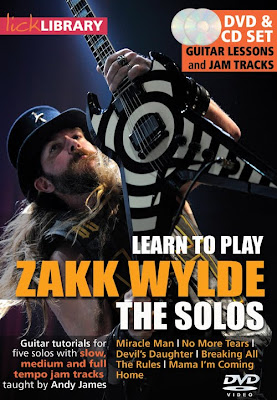 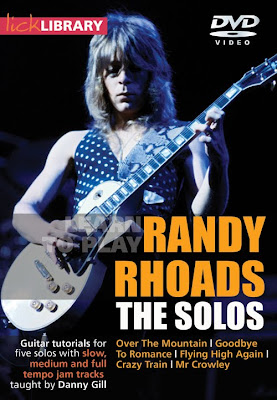