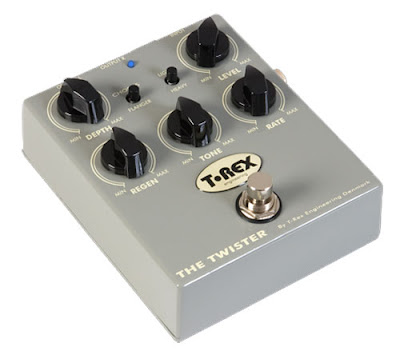 The idea of combining chorus and flanger in a single analog pedal isn’t exactly a new one: the two effects share mostly the same circuitry, and each can be coaxed into at least approximating the sound of the other (flangers are typically able to reproduce warm analog chorus sounds, while in my experience most chorus pedals can produce only a subtle flanging effect). But the T-Rex Twister adds a whole swag of options and additional functionality, further blurring the lines between the two effects, while also exaggerating the very things that make them different from each other.

Controls on the Twister include On/Off, Level, Depth, Regeneration, Tone, Rate, Chorus/Flanger, Light/Heavy, and a side-mounted, push-in/push-out input level control with an associated red LED, so you can tame down your ingoing signal for a cleaner, more hi-fi sound, or crank it up for some soupy, swirly warmth. There is a single input and twin outputs (stereo left and right). Power is via a battery (recommended only for emergency back-up purposes – I guess it eats up batteries pretty quickly like a lot of pedals of this ilk) or 9v adaptor.

I found myself drawn to several specific sounds with this pedal. One was a Gov’t Mule-inspired rotating speaker tone, achieved by selecting the chorus mode, cranking up the speed, staying in ‘Light’ mode and having Tone and Depth at around 3 o’clock each. This one was especially responsive to P90 pickups, and I wish I still had a Firebird so I could try it with mini humbuckers too, because I can just tell it would sound amazing.

Another sound I kept returning to was a Paul Gilbert flanger freakout, with the rate at 9 o’clock, Depth and Regeneration on full, and Heavy mode engaged. This sound was thick and metallic, with lots of shifting harmonics and pushing at the edge of feedback when used to drive distortion. It was especially satisfying to bend and hold notes on the wound strings, and let the pedal take over.

Finally, there were a lot of usable classic chorus sounds – nothing with quite the same amount of unique individuality of the other two settings described above, but still of a very high quality. A wide variety of sounds are available by varying the input gain and tone controls, from a bright, clean, funky 80s LA studio sound, to a warm, overdriven growl.

The T-Rex Twister is a very versatile pedal, and is able to swing from natural, soulful sounds to crisp, almost cold ones. It’s not just a chorus and a flanger: it’s studio-quality hi-fi and vingage-quality lo-fi versions of each. The stereo capabilities add a further layer of swirliness and usability, and the input gain control is a genius feature which I’d like to see incorporated in a lot more pedals. Ultimately you’ll either find one sound you’ll stick with for live use, or you’ll explore the Twister’s depth more fully in a studio setting, where it really comes to life.