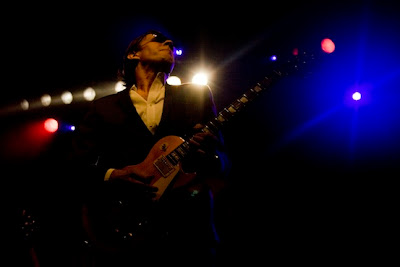 While Pauline France was covering the Guitar Center King Of The Blues contest for I Heart Guitar (read her article here) she made arrangements to interview special guest Joe Bonamassa. Unfortunately schedules didn’t permit an in-person interview but Joe was kind enough to do a short interview by email. Thanks Pauline and Joe!

How did you create your own style to a point where people started to recognize “Hey, that’s Joe Bonamassa”?

I didn’t realize people are /were saying that. I am a product of my influences nothing earth shattering or original going on here. In my opinion

What did you think about the King of the Blues contestants? Do you see any new trends/stylistic threads developing in the world of blues guitar playing?

I saw a bunch of kids with a lot more drive and determination than I have playing blues oriented stuff. Its a fantastic sign for the future. They were all good. Very proud of them.

Tell us about your upcoming projects, gigs, etc.

New Studio CD titled “Black Rock” slated for March 2010. On tour now in Europe with special stops in Greece and Israel. There will be plenty of Touring for 2010 in the US, Europe, Australia, and Japan!

What has been one of your biggest achievements as a performer?

What else would you be doing if it weren’t music?

“FBI or CSI for sure. David Caruso has nothing on me. I’m being serious by the way. Law enforcement”

Now it’s time for something different. I will say one or two words and you will tell me the first thing that comes to mind.